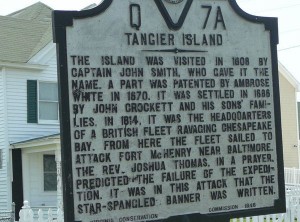 Tangier Island is a unique island in the middle of the Chesapeake Bay. Accessible only by ferry, only a few hundred individuals live there. The economy is fueled by the seafood industry and tourism. The Chesapeake Bay and storms like the recent Sandy are battering away at the coastline of this tiny island. This is welcomed news:

TANGIER ISLAND – Governor Bob McDonnell and Col. Paul Olsen of the U.S. Army Corps of Engineers traveled today to Tangier Island in the Chesapeake Bay to announce they have signed an agreement to build a long-awaited seawall and jetty to protect the Island’s endangered harbor. The project will involve both state and federal funding.

“This is fantastic news,” said Governor McDonnell. “The harbor is the economic heart of Tangier Island, and the center of a significant commercial fishing industry worth millions to Virginia’s economy. As Hurricane Sandy demonstrated all too clearly, it is critically important to protect the harbor with this barrier to clouding and coastal erosion. Also, this project will enable us, at the same time, to continue to preserve a culturally significant way of life that has changed little over centuries. Tangier Island is an important part of Virginia’s past and Virginia’s future. I applaud the Corps of Engineers with moving forward with this vital project.”

“This is a great step forward, not only for the Corps, but also for the country, the Commonwealth and, most especially, for the people of this community,” said Col. Paul B. Olsen, commander of the Corps’ Norfolk District. “As a group, we’re making progress in the effort to protect the rich history and culture of Tangier Island.”

Located in the Chesapeake Bay near the Maryland border, Tangier Island is three miles long and home to fewer than 500 people, many of whom are watermen who catch fish, crabs and oysters as their ancestors have since the late 1600s. There are few vehicles on the island, and the residents speak a dialect akin to the English that was spoken when the island was discovered by John Smith in 1608.

More than 125 Tangier residents currently are licensed commercial watermen. The dockside value of the seafood they landed last year was $3.4 million.

The seawall project has been on the drawing board for more than a decade, but federal funds were not available. The McDonnell Administration has focused on securing that funding since taking office. With the Corps’ agreement several weeks ago to commit federal funds, a cost-sharing agreement with the Commonwealth was signed and the project approved for study, design and construction.

The project includes construction of a 430-foot-long seawall, a 50-foot spur jetty and the armoring of 170 of shoreline with stone revetment. The purpose is to protect the channel to the only harbor on the island, and shield the harbor itself from direct wave impact and from damage caused by sheets of ice pushed into the inner channel and harbor. The project also will reduce erosion of the shoreline and sediment flow into the navigation channel.

The cost of the project is currently estimated at $4.2 million, of which the federal government will ultimately pay approximately $3.2 million. The state’s share would be $950,000 over the next five years. The Commonwealth approved its funding in last year’s biennial budget.

The cost-sharing agreement that was signed calls for a 50-50 split between the state and federal government for a feasibility study that is expected to take two years. The total state share of that study will be $175,000 this year and $96,000 next year. That funding will be included in the governor’s budget, which will be unveiled in December.

Project design and construction are anticipated to be completed in 2017.

“The hard-working folks of Tangier Island carry on a Chesapeake Bay legacy that is truly unique, and we must do what is necessary to preserve this treasured place,’ said Congressman Scott Rigell. “After working on this issue since before taking office, I am so pleased to see this day. I applaud the dedication of the Army Corps of Engineers, Governor McDonnell, and Secretary Domenech to Tangier Island and the Eastern Shore way of life.”