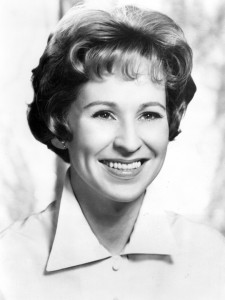 We loved her as Esmerelda on Bewitched, Cousin Alice on Mayberry R.F.D. and as Bernice Clifton on Designing Women.

She first came to Broadway in Leonard Sillman’s New Faces of 1952 and in the film version in 1954. In 1965 she won a Tony Award for Best Featured Actress in a Play for her rold as Mavis Parodus Bryson in The Sign in Sidney Brustein’s Window. In 1978 she followed Dorothy Loudon, creator of the role, as Miss Harrigan in the Broadway musical Annie.

Ghostley also appeared on screen as Stephanie Crawford, the neighborhood gossip in To Kill a Mockingbird and as shop teacher Mrs. Murdock in the film version of Grease.