Why you never get to write “The End” 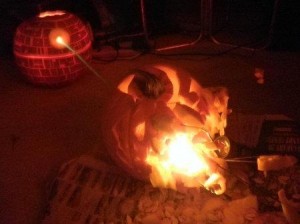 I heard a sound like a million pumpkin seeds crying out at once and then...pie.

Senate Democrats run from Obama and to…McDonnell?
Anita Kumar, The Washington Post
It’s not President Obama, who some distanced themselves from last week during his trip to the commanwealth. It’s Gov. Bob McDonnell, a Republican who some of these same Democrats said was too conservative for Virginia during his 2009 election.

5 Ways Netflix Can Stop the Bleeding
Mashable
The company knows it messed up. Its third-quarter earnings letter to stockholders put it in pretty stark terms: “We compounded the problem with our lack of explanation about the rising cost of the expansion of streaming content, and steady DVD costs, so that … many perceived us as greedy.”

Obama’s Latter-Day McGovernism
Rich Lowry, National Review
After the rebuke of the 2010 election, the natural play for Obama was to drift to the center to erase memories of his first two years. He’d execute a version of the presidency-saving turnabout of Pres. Bill Clinton after 1994. But Obama is now to the left of where he was on Election Day 2010. He’s taken his cues less from Clinton than from Howard Dean.