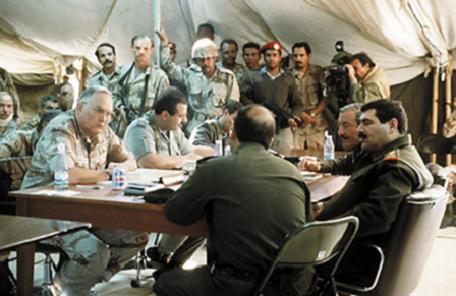 Twenty years ago tomorrow marks the anniversary of one of the most stunning victories ever achieved by the Armed Forces of the United States (or any nation, as far as that goes). As George Herbert Walker Bush so beautifully and movingly observed at the time, they did so with great honor, and with great valor. Their sacrifice and power stands to this day as an exemplary light to our nation.

I was working in Washington, DC as the Meetings and Conventions Director for the American Legislative Exchange Council.  During the Reagan and George H.W. Bush years we were privieleged to take a select group of state legislators to the White House each year to hear the President.  In 1991, our meeting was just shortly after the end of Operation Desert Storm.  Those were exciting times, and it was in that speech that President Bush first declared:

“By God, we’ve kicked the Vietnam syndrome once and for all!”