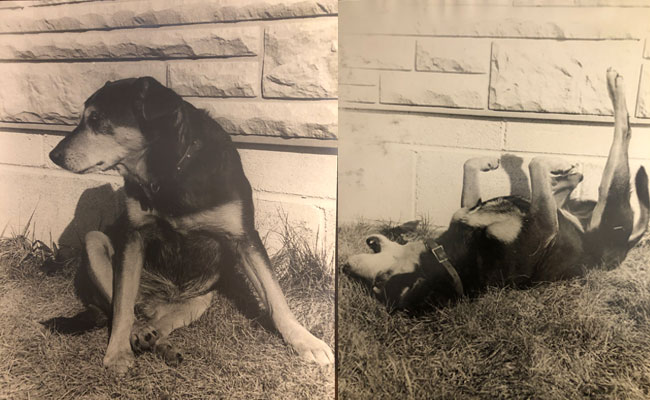 Make it your ambition to lead a quiet life: You should mind your own business and work with your hands, just as we told you, so that your daily life may win the respect of outsiders and so that you will not be dependent on anybody.

We’ve made it through another week, and another month. Here is today’s installment of Short Story Friday.

It was Christmas Eve.

I think it was the year before I started school.

Family tradition always had us gathering at the home place where my grandfather and aunt lived. My aunt, also widowed, lived there to care for my grandfather as his health began to fail. The family, the aunts, uncles, and cousins in town, would gather with them on Christmas Eve as they opened their gifts.

My brother and I were ready to go. Anxious. The sooner we left and came home, the sooner Santa would come.

But my father wasn’t home yet from working at the garage he owned with a friend. In later years I might have thought that he was drinking, especially when he finally came in with an unusual smile on his face.

He finally made it home and we prepared to go.  But he stalled us.

With a grin that I still remember more than fifty years later, he reached into his coat pocket and pulled out a tiny bundle.

A little black and tan puppy.

We didn’t think we’d be getting another dog. Our collie Tucker ate the neighbor’s lawn furniture and we had

to give him to another family.

Our kitten had been backed over on our way to church one evening.

We hadn’t had the best of luck with pets.

My father wanted to name her Queenie.

My brother and I named her Jill.

We wanted to stay home to play with her, but we had to be at the family gathering.

My father found a box and we made her a bed. I gave her one of my favorite stuffed animals. She cried, but we had to go.

A few hours later we returned and she was happy to see us. Unfortunately, she had peed on my stuffed animal. My Mother refused to wash it and it was gone.

Jill was with us for the next twelve or thirteen years.

Jill would walk with me to the park where I often went after school. I loved the big swings there.

She would stay close to me and never run off. She was never on a leash.

She would cross the street when I did.

But when I was going to school, or to the pool and she couldn’t come, I’d just have to tell her to stay.

That didn’t mean she didn’t feel free to roam the neighborhood. But she knew where home was.

When I was in high school, Jill got sick and could no longer walk.

My father knew that the best thing for her was to put her down. He couldn’t bring himself to do it.

In geometry class, I would talk to my friend Diane about Jill. It was months before I realized that Diane thought Jill was my sister.

Jill would spend the day in the yard and every evening I would carry her back up the hill from where she had drug herself to go to the bathroom.

This went on for weeks.

One day, she stood and walked. She was with us for another five years and her health began to fail again.

By that point we had moved across town. Neighbor complaints meant that we had to keep Jill tied or penned. My parents had not accepted indoor pets at the time other than when the weather turned too cold.

My brother had married and moved away. I was away in college.

Rather than put Jill down, my father took her to a friend’s farm hoping she could live her last days in the freedom we couldn’t give her in town.

The urge to be home with her people again was far too strong.

She left the farm and we never saw her again.

She was the best dog.

Because if you asked any one of them, they’d tell you they were the best dog.

And they’d be right.

Black Leadership Group: ‘Biden Used Black Americans To Ascend To The White House, But Has Basically Turned His Back On Them’
Daily Wire
“A hundred days of divisiveness have hurt the black community, with damaging policies bringing more harm than help,” asserted Project 21 member Martin Baker. Read more.

That Polish pastor in Calgary who’s been warning us about totalitarianism now has a warrant out for his arrest!
Not the Bee
If you haven’t followed this story, Pastor Artur Pawlowski is a Polish immigrant to Canada who grew up under communism. Authorities have come to his church multiple times during worship to take pictures of those worshipping and look for reasons to shut down the church, as they have with others. Read more.