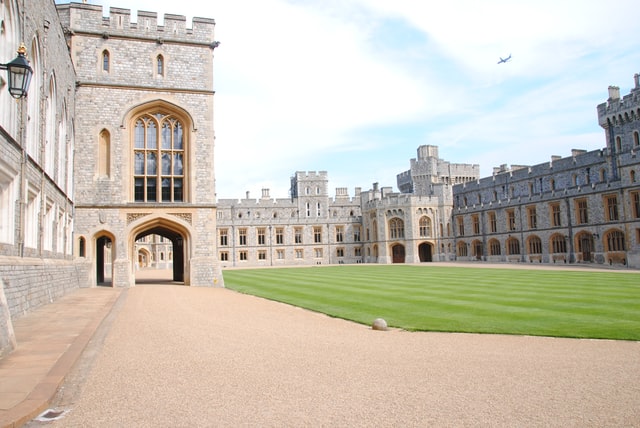 And did those feet in ancient time
Walk upon England’s mountains green:
And was the holy Lamb of God,
On England’s pleasant pastures seen!

And did the Countenance Divine,
Shine forth upon our clouded hills?
And was Jerusalem builded here,
Among these dark Satanic Mills?

I will not cease from Mental Fight,
Nor shall my sword sleep in my hand:
Till we have built Jerusalem,
In England’s green & pleasant Land.

Jerusalem was one of the hymns played at the funeral of Prince Philip, the Duke of Edinburgh. The service that he planned himself was beautiful, elegant, and inspiring. Queen Elizabeth was as graceful and poised as ever. But what a heartbreak to watch the Queen say goodbye to her love and companion for the last seventy years.

Like millions around the world, I watched the funeral of Prince Philip on Saturday. A beautiful day, an inspiring ceremony, a marvelous tribute to a life well lived.

I first heard the hymn quoted above in the movie Chariots of Fire. Keep reading.

Saturday afternoon I attended an online summit with more than a hundred Santas from around the world. Let’s just say that being Santa, or being a good Santa, is a lot more than just putting on a cheap red suit from Party City.

Don’t get me wrong, those less expensive suits have their place. I wore one several years ago when I was the PetsMart Santa. There were no happy accidents, but I would have hate to have that happen in a $500 suit.

But back to England.

I’ve mentioned before that this year is my year to focus on British History and literature. I think I said one day last week that I’m going to need more than a year. And I’m way behind on my Goodreads reading challenge.

I don’t recall what prompted this particular focus. I think maybe it had to do with last year being one of the years I re-read both The Lord of the Rings (of course I started with The Hobbit), and The Chronicles of Narnia. Somewhere in there I told myself that I needed to read more Tolkien and Lewis and it just grew from there.

Then there’s the point on my bucket list about reading the entire works of Shakespeare. That’s why I was thrilled to find the Chopped Bard podcast (link below). It’s going to take much more than a year. The podcast helps because I don’t find reading Shakespeare to be an easy task no matter how much I try.

I’m getting to a point here, honest.

Both Ernest Hemingway and Mark Twain said some version of “write what you know.”

If you Google “write what you know” you’ll find multiple variations of the quote as well as authors who agree and/or disagree with the thought.

What I don’t know is a lot about British literature and British history.

What I do know is that in putting this post together I realized that I wrote a very similar post in March.

So maybe it would be better to end by talking more about the movie (notably different from THE MOVIES, but still significant).

Chariots of Fire remains one of my favorite movies some forty years after I first saw it in the theater. It’s the beautifully written and displayed story of Olympic athletes Harold Abrahams (played by Ben Cross) and Eric Liddell (played by Ian Charleson). Chariots of Fire won four Academy Awards in 1982, including Best Picture.

On a side note, while I knew some of this, last night I caught some other familiar faces.

Of course as a fan of THE MOVIES, I knew Ian Holm who portrayed Sam Mussabini was twenty years later to

Alice Krige, who played Sybil Gordon, the love interest of Harold Abrahams, was later the Borg Queen in First Contact.

Not the only actor to find their way to the stars, Ben Cross portrayed Sarek in the 2009 Star Trek, of course that’s an alternate timeline.

What I hadn’t caught before was Richard Griffiths, a.k.a. Vernon Dursley, as the Head Porter at Caius College. A young Kenneth Branagh appeared in an uncredited role in a crowd scene.

In preparation for the role of the Scottish missionary, Ian Charleson read the Bible from beginning to end. Charleson was also an outstanding stage actor and singer. Sadly, Charleson died from AIDS at the young age of 40, just seven weeks after playing Hamlet at the Olivier Theatre.

Eric Liddell also died in his early 40s. After winning at the Olympic games Liddell returned to China as a missionary. He was born there to his Scottish missionary parents. He would die in a Japanese Internment camp near the end of 1945. We had missionary friends who were there with him in that camp.

His last words were reported to have been “It’s complete surrender” while discussing a book he had written about surrender to God’s will.

Of course the movie takes some liberty with the actual story. Liddell did refuse to run on Sunday, but he did not learn of the Sunday heats on crossing the English Channel. In fact the schedule was known well ahead of time and the decision was made in advance of the actual games.

One of my favorite quotes from the movie is when Liddell is talking to his sister Jennie (Cheryl Campbell). She fears that his attention to running is taking him away from his calling as a missionary.

He tells her that he does plan to return to China, but that he had a lot of running to do first.

I need to read more about Eric Liddell.

While I’d love to visit, I’ve never felt a particular call to China. I did consider missionary work for a while. I spent much of a summer working on the Navajo Reservation in New Mexico (and also at a school in Arizona). Not going back was one of those left turns in Albuquerque that I didn’t take. Literally this time.

And it goes without saying (but you can buy the sticker) that I don’t run.

But over the weekend I was inspired by two lives well lived. One amazingly long. One tragically cut short.

Sure makes it difficult to whine about Mondays.

Photo by Nihal Shah on Unsplash

Do You Really Need to Hold That Meeting [Quiz + Tips]
HubSpot

The Victorians had to Accept Darwin. We Need to Accept That Cops Kill White People as Easily as they Kill Black People
John McWhorter at It Bears Mentioning

Why does Biden let the UN ambassador tell the world the US is racist?
Washington Examiner