Swim with the Current

I miss the stage, and the sea…

Reported to be the last song the orchestra played as the RMS Titanic sank.

On this day in 1912, the White Star Line passenger liner Titanic hit an iceberg in the North Atlantic Ocean. Early on the morning of April 15, the ship sank. 2224 people were aboard, more than 1,500 of them perished in the sinking of the ship that “not even God could sink.”

It’s hard to imagine the horror felt that night for those who perished and those who watched their loved one die.

But that doesn’t mean that Hollywood and Broadway haven’t tried.

The first movie I saw about the ship was the 1953 Titanic that included Barbara Stanwyck, Clifton Webb, and Robert Wagner. In that film a young boy named Harper Carter gives up his seat on the lifeboat. When his father asks why he tells him that he was “wearing long trousers,” a throwback to an era when that signaled boys becoming young men by going from shorts to trousers.

The 1958 A Night to Remember is considered to be one of the most historically accurate films with the notable section of the ship not breaking in half.

Broadway got in the act, so to speak with Meredith Wilson’s The Unsinkable Molly Brown starring Tammy

Grimes and Harve Presnell. Presnell reprised his stage role in the 1964 movie starring Debbie Reynolds. Presnell and Reynolds started in a 1989-1990 national tour.

If you’re casting, I’m too old to play Johnny Brown, but I could rock either Shamus Tobin or Christmas Morgan. I’m just sayin’.

In 1997, James Cameron gave us the blockbuster Titanic, with Leonardo DiCaprio, Kate Winslet, Billy Zane, and Kathy Bates. The romanticized version won 11 Academy Awards and was number one on the highest-grossing films for 12 years before being dethroned by Avatar and Avengers: Endgame. Adjusted for ticket price inflation, Titanic moves down to number five with Gone With the Wind topping the list.

I’ll watch Titanic when it’s on television, but mainly for the Jack Frost scene.

My wife and I actually saw Titanic: The Musical on Broadway in 1998 with a cast that included Brian d’Arcy James. Titanic won the Tony Award for best musical in 1997.

I didn’t get to see the Serenbe Playhouse production in 2018 as much as I wanted to. Nightly. the cast and crew performed on a skeletal framework, four distinct levels of scaffolding, of the ship that sank nightly.

I did see the middle school production that my son stage managed and my wife played keyboard for. Sure it was everything you think a middle school musical might be. But when those kids were reaching out to each other as the last lifeboat was being lowered, they nailed the scene.

Titanic is still one of the musicals I’d like to do. I’ve “sailed” on stage twice in two productions of Anything Goes. With Giles Little Theatre in 1975, and with The Theater Company at Ft. Lee in 2019. On a side note, if you’re casting the Titanic, I’d cut my hair for that part (only one of four shows I’d do that for).

Titanic shows up in many other productions including the opening scene of Downton Abbey in 2010 when the Crawley family learns that the heir has perished aboard the Titanic. No spoilers, but did he really?

The sinking of the Titanic is one of those stories that will always be with us. It fascinates us and at the same time horrifies us.

What really happened? What was is really like? And why wasn’t that damned door big enough for two people?

I haven’t (yet) written about the Titanic. Well, other than this post.

I’m not sure that it will ever be one of my stories. I still have a novel about life after Hurricane Katrina in draft form. I’d like to get back to that one day. And my current inspiration is a quirky little story from the Tower of London during the 100 Years War. That’s going to take a lot of research.

But today we remember the Titanic. The lives lost. The stories true or fabricated. The cinematic or theatrical failures and triumphs.

And a gentle reminder that the White Star Line suggests you never, ever, skip dessert. 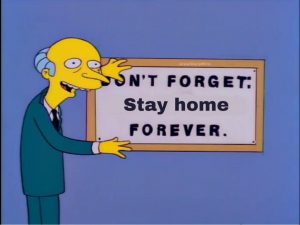 Due Process Is Good, He Said Controversially
Matt Taibbi

The Politics of Memory
Stanley G. Payne in First Things