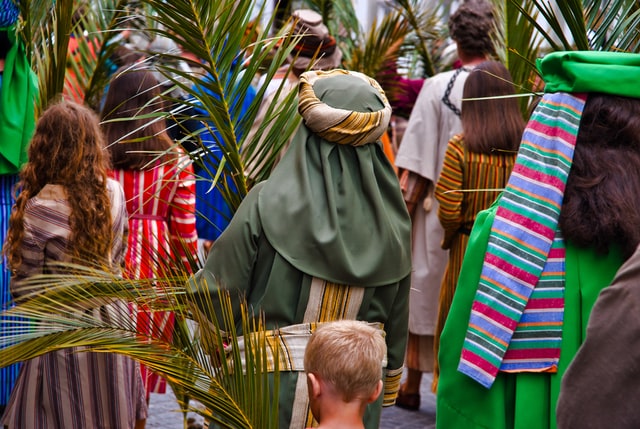 The disciples went and did as Jesus had directed them. They brought the donkey and the colt and put on them their cloaks, and he sat on them. Most of the crowd spread their cloaks on the road, and others cut branches from the trees and spread them on the road. And the crowds that went before him and that followed him were shouting, “Hosanna to the Son of David! Blessed is he who comes in the name of the Lord! Hosanna in the highest!” And when he entered Jerusalem, the whole city was stirred up, saying, “Who is this?” And the crowds said, “This is the prophet Jesus, from Nazareth of Galilee.”

Today is Holy Monday, the second day in Holy Week.

Yesterday, churches around the world waved palm branches and sang the loud Hosannas of Palm Sunday. Many did it virtually since gathering to worship in person is coming back very slowly.

A year ago on Palm Sunday we had no idea that some 52 weeks later, give or take the Spring Equinox, that we would still be wearing masks, worshipping virtually, and praying for this pandemic to pass. 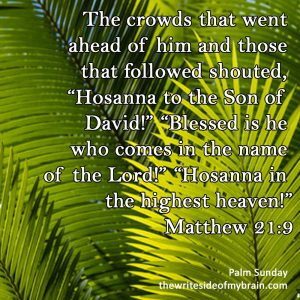 We can speculate, okay guess, about what we think will happen, but really we never know.

So, that day as Jesus was riding into Jerusalem the people thought they knew what would happen.

They waved palm branches and threw their cloaks on the ground. Jesus was about to come into his kingdom.

Well, yes, but not the way they thought.

Even those closest to him still didn’t understand. By this point, Judas was probably having his doubts, but he had yet to make the deal to betray Jesus.

Only Jesus knew the week ahead.

He knew what he would face on that coming Friday. But he also knew that Sunday would soon come. Not soon enough. But it would come.

I wonder what he thought as he rode through the town. People cheering and shouting “Hosanna.”

He alone knew that they all would leave him before the end.

He alone knew that he was on his way to the cross.

And, he just kept going.

I’m thinking about that this morning. Thinking that, while it’s a hard concept to grasp that the God who became man knew what would happen.

But not only that, he knew and understood all of history. He knows each one of us by name.

There’s an old gospel song that says “When he was on the cross, I was on his mind.”

I’m not sure I buy the sentiment in that. And I’m writing this far too early on a Monday morning to get into the theological concepts.

Holy Week is different again this year. But unlike last year, there are glimpses of hope that life might begin to return to something that looks like normal.

None us really know what will happen, but there’s this guy riding into town on a donkey.

He knows exactly what will happen.

And he just keeps going.

Photo by Brady Leavell on Unsplash

Trump on “Strange” Biden Press Conference: “He Got Softballs… It Was Like A Different World”Real Clear Politics