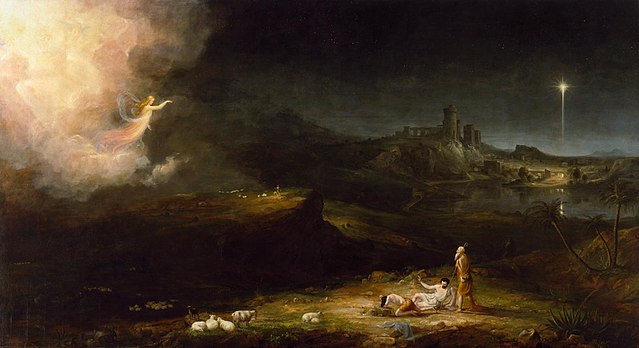 As Christmas trees go up around the world, many are placing angels on the top as a reminder of the announcements leading up to the birth of Jesus.

In our house, we’ve got a star on top of the main tree. I say main because we have another tree devoted to

Santa ornaments. When you start playing the man in the red suit, ornaments just start appearing. That tree is topped with a Santa hat.

We used to put an angel on top of the tree, but she obviously was an angel second class and over the years became a little worn. Loved, but worn.

Plus, the start lights up.

Truth is, we have two trees and if we had a house that was large enough for a third, we could do a tree with all angels.

We have more angels than a Della Reese Christmas special.

But, angels are significant to the Christmas story.

The Angel Gabriel appeared to a priest named Zechariah to tell him of the upcoming birth of John the Baptist. Zechariah wondered how this could be, he was not a young man. He couldn’t speak until the baby was born and wrote out on his iPad “His name is John.” (Luke 1:59)

We’ve already talked this week about the angel appearing to Mary and telling her that she would bear a son. (Luke 1:26-28)

Of course, Mary believed, but what about Joseph? Not to worry, an angel appeared to him in a dream and said,

Joseph son of David, do not be afraid to take Mary home as your wife, because what is conceived in her is from the Holy Spirit. She will give birth to a son, and you are to give him the name Jesus, because he will save his people from their sins.

Over in the fields, shepherds were just doing their nightly duty keeping watch over their flocks and all that.

That first angel is soon joined by an entire choir, you know kind of like what they do at a Gaither Homecoming Concert.

The shepherds rush off to see the baby and complete your family nativity set.

But we’re not quite done with angels.

Herod is hearing rumors about the birth of this child and he goes on some sort of pre-Planned Parenthood baby killing frenzy.

But, after the birth of the child, another angel warns Joseph to take Mary and Jesus to Egypt where they stay until Herod dies and another angel comes to tell them it’s safe to go home.

That’s a lot of angels in one story.

For that matter, neither is the star.

I don’t know that I’ve ever actually seen an angel.

Well, I’ve seen plenty of people dressed like what we think angels look like. You don’t spend more than sixty years going to church Christmas pageants and productions without seeing that.

But while I haven’t seen them, I’m pretty sure there’s at least one very busy guardian angel watching over me.

Probably on their angel coffee breaks, because of course coffee is a heavenly substance, probably my guardian angels turns to his friend and says “Hey Gabe, you’ll never believe what the idiot did today.”

That’s probably another post. Or another book. And very likely one I’ll never write for public consumption.

As you place the angel on your tree, or in your nativity set, or with your collection of yard inflatables, think about how they brought us the story.

The angels knew the story was never about them.

All of these angels appear to tell and advance the story of the coming of the Christ Child.

Everything points to what happens in Bethlehem.

We’re just a little closer to that today.