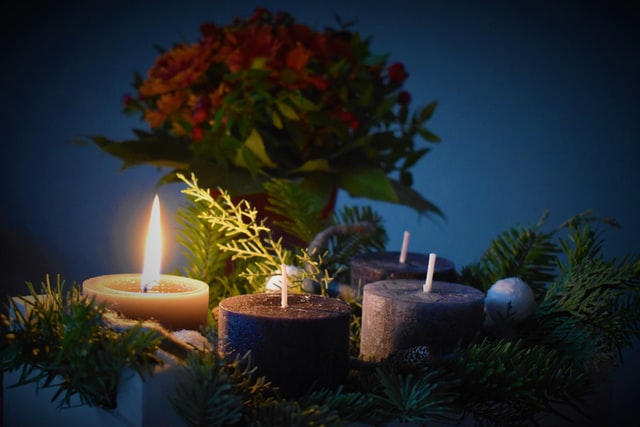 But you, Bethlehem Ephrathah,
though you are small among the clans of Judah,
out of you will come for me
one who will be ruler over Israel,
whose origins are from of old,
from ancient times.

Yesterday was the first Sunday of Advent. Churches around the world lit the first Advent candle and talked of hope and anticipation.

And yet, in the history of mankind, our present day struggles, as annoying as they are, are just a little more 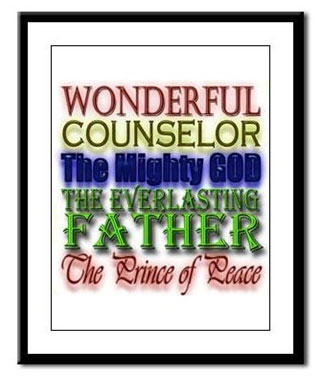 Our house is all decorated for Christmas. For the first time ever, we had everything done before Thanksgiving. Well, everything except our Advent wreath which replaced the Thanksgiving centerpiece yesterday.

In anticipation of the schedule in the big red suit, I informed the family that if they wanted me to decorate, it had to happen early. As things turn out, my Santa schedule has been a bit delayed. But I’ll have some other challenging calendar items coming up, so this is still a good thing.

I’ve been enjoying falling asleep in the comfy chair watching a familiar holiday movie by the light of the tree.

In this Advent season, I am really trying to focus, or refocus on the true meaning of the season. It’s not the lights or the decorations or the presents. Those things are all grand and wonderful.

It’s about the journey to Bethlehem and what happened there.

I visited Bethlehem almost forty years ago. Actually twice in six months. The reason for back-to-back trips may or may not be in the book(s) and is not relevant to this story.

The first time there I was a bit taken back by the commercial nature of things I saw in Bethlehem. I suppose I was naive enough to think that it was going to be some magical, holy place.

Don’t get me wrong, it was a beautiful experience. It’s just that it was a reminder that often when God creates something beautiful, man puts his imprint on it and sometimes distort or even tarnish that beauty.

Let’s also say that it is true that on the second visit, I knew where I wanted to shop.

I suppose I expected the Little Town of Bethlehem that I remembered singing about since I was a child.

It was just a reminder that many of our Christmas traditions are just that, and are not based so much on fact as sentimentality.

Years ago I painted a ceramic nativity set that still graces our home today. Let’s just say that it was before the first trip to Bethlehem. Let’s also say that, given the chance I might make different artistic choices. I mean,, what we have right now is sort of a bunch of white people in bathrobes…he was born at night, right?

You may or may not have a nativity scene in your home. Probably complete with the wise men who actually didn’t show up until about two years later.

But if it reminds you to thing about the birth of the Savior and God’s gift to mankind, then that’s okay.

Well, it’s okay unless you’re one of those people who take your Christmas decorations down on the 26th.

I’m amazed by the people who I see posting on Instagram that “it’s all packed away” before they enjoy their second Christmas ham sammich.

Christmas is not over on the 26th. You have to at least wait for Epiphany on January 6 to take things down.

This year is understandably different, but for us most years, the weeks leading up to Christmas have been filled with rehearsals and performances. We usually aren’t even able to enjoy the tree until after the present frenzy.

Truth is, in our house, we do well to have things down by the three-day weekend for MLK, Jr. Day. It used to

be easier because I had a four-day weekend when included Lee-Jackson Day, but the General Assembly finally defeated the Confederacy and took away that holiday and replaced it with a holiday for Election Day. I’m okay with all of that except that I really enjoyed having four days off.

Truth is, we may or may not have our decorations down by that weekend.

When we were first placed under house arrest in March, one of our local radio hosts suggested that we all go out and put our Christmas lights back up to boost everyone’s spirits.

Honestly, if mine had been down for more than two weeks, I might have considered it.

If there ever was a year to extend the Christmas season, perhaps this is it.

As we begin our journey to Bethlehem, take some time to think about what it means.

We don’t have the trappings of the holiday parties with friends or dreaded work luncheons to stand in our way. Concerts and caroling are virtual.

What ever you’re anticipating or hoping for, take some time to sit by the tree, or festive decoration of your choice and remember the real reason for the Season.

And, unlike Joseph be sure to call ahead for reservations.

Photo by Waldemar Brandt on Unsplash