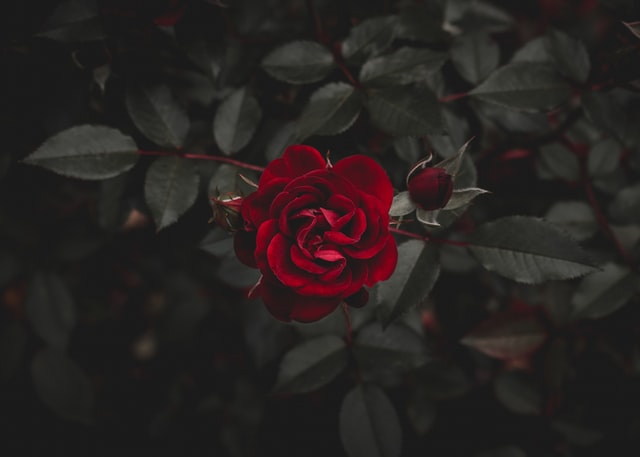 Truths and roses have thorns about them.

You’ve seen the Life Change Index Scale. You know it’s that little survey where you award yourself so many points for each stress factor you’ve experienced the past year.

I strongly suggest we all avoid it this year.

Saturday, the AP called the election for Joe Biden and Kamala Harris. They gave their “victory” speeches on Saturday night. 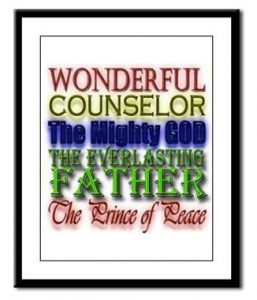 There was much rejoicing in the land and in the streets, which is as clear a signal as any that the pandemic is over.

It’s not. Neither is the election.

Look, I purposely never came out and told you how I was voting. If you know me, you know my writing, and my history, then you’ve already figured it out and we don’t need to go there.

I remember the battle of 2000 when Al Gore thought he was President for 37 days. My regret this time around is that no one has thus far come up with anything as clever as “Sore Loserman.”

If things stand, Joe Biden will be the next President of the United States. But the system has to play out, and that means addressing allegations of voter fraud, running recounts, and having the election certified by Congress.

Seems to me that both sides would be interested in making sure we have an accurate count.

I talked the other day about how ridiculous I think it is that people cut family and friends out of their life over politics. And, you see it mostly happening from the left. Not exclusively, but consider.

Already “journalists” are saying things like “The Republican Party must be burned to the ground.”

Already politicians are creating lists of the Trump supporters saying the must be canceled and never hired again.

Michelle Obama, the wife of the man who thrived on this division (“I won. Deal with it.”) and was the primary reason Donald Trump was elected in the first place came out and said that (and I paraphrase) 70 million Americans must be taught to see why they were wrong.

That’s pretty rich from the party that screamed #notmypresident for four years, who manufactured a Russian scandal, and brought a baseless impeachment.

Not a helluva lot of love trumping hate from the party of diversity and inclusion.

If you sanction any of that, Donald Trump was never your problem.

You’ve bought into a media narrative that’s just not true.

I’m not going to rehash the election. The courts will do that. If the courts rule in Biden’s favor, then so be it. He will be the 46th President, and we’ll move on from there.

He’s going to have a pretty hefty job making nice with the people he called Nazis and chumps.

By the way, all of these references can be documented if you take the time to look them up. I’m not doing your homework.

Regardless of your political persuasion, if you look at this election and don’t see a whole lot of monkeyshines going on, you’re not being honest.

People who voted for Donald Trump are not your enemy.

People who voted for Joe Biden are not your enemy.

I don’t know how often I have to say that. 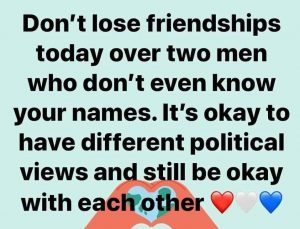 I had a friend share the meme over the weekend. You saw it, and I’ve posted it here. I’ve posted similar sentiments.

My friend was challenged over this by people who said “not this time.”

We have to get beyond this people.

We can’t let our relationships be arguments over which old fart was the stinkiest.

Crude? Maybe, but these are crude times.

We need to get back to a time where people could argue policy all day long and still go out for a beer or two after work.

Ronald Reagan and Tip O’Neill did it.

Ralph Wolf and Sam the Sheepdog did it.

There won’t be healing until we can figure out how to do it as well.

We’re rapidly heading into the Christmas season. If you find a box of ballots under your tree, they’re not valid.

Christmas is the season of the Prince of Peace.

It might be a struggle these days to have Peace on Earth.

Maybe we need to start with peace around the dinner table.

To summarize: it is a well-known fact that those people who must want to rule people are, ipso facto, those least suited to do it.

To summarize the summary: anyone who is capable of getting themselves made President should on no account be allowed to do the job.

Douglas Adams, The Restaurant at the End of the Universe

Photo by Joshua Harris on Unsplash