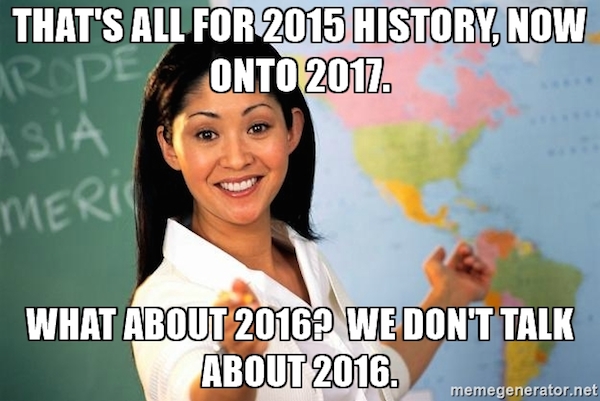 Was it just four years ago?

With all that’s been going on, and not going on, and with all of the meme sharing, good and bad, I’ve spent a little time pondering 2016, specifically the end of 2016.

It seemed that, especially near the end of 2016 we were losing a lot of celebrities.

I mean just after Christmas that year we lost Carrie Fisher AND Debbie Reynolds just a day apart.

There’s this from The New Yorker:

But 2016 does seem to have earned some sort of special designation. Even before November, the year felt, to me, like a single sleepless night spent absorbing an interminable series of nightmares through my phone. There was Zika. There were terrorist attacks every few days, including the bombings in Brussels and the Bastille Day deaths in Nice. In June, fifty people were killed at a gay dance club in Orlando; in July, a single suicide bomb in Baghdad killed two hundred and ninety-two. David Bowie died, as did Prince, Muhammad Ali, Leonard Cohen. On July 5th, Alton Sterling was pinned to the ground and shot at close range by policemen in Baton Rouge; he had been selling CDs in a parking lot. On July 6th, Philando Castile was killed by police during a routine traffic stop in Minnesota; his last moments were caught on video by his girlfriend, Diamond Reynolds, who recorded Castile bleeding out as the hysterical officer berated her. On July 7th, during what had been a peaceful protest in Dallas against these unlawful police killings, five police officers were killed.

And, all of that was before we even got to the election.

I just remember all, okay not all, but a lot of us complaining online about how we wanted the year to just end already.

With all due respect, Dave, I think we’re going to have to apologize to 2016.

Here we are at the beginning of April facing another couple of months of social distancing.

Yes, I know the current recommendation from the President is through April 30. But here in Virginia, where we always pride ourselves in being snootier than thou, we’re under a Stay-at-Home order until June 10.

That’s a little more than two months of this.

Like I wrote the other day, I’m trying to seize this as an opportunity.

I’m trying to learn as much as I can.

I’m also trying not to eat as much as I can.

We’ll get through this. And, I hope that when we do, we’ll be a better people.

I’m not discounting the horrible loss of life that this virus is bringing. Just yesterday a high school friend who is quite an accomplished musician in New York City said online that he had lost eleven friends or acquaintances in the last two weeks.

I worry about friends. I have one local friend who has now quarantined himself after a call to the doctor. His symptoms are mild, but they fit the profile.

I worry about older relatives.

I don’t know. Quite honestly, 2016 seems like a mostly distant memory.

I’m hoping the second half of 2020 will redeem the first.

It will if we flatten the curve.

Buy my script on Amazon.

Buy my stuff on Zazzle and CafePress.

But, stay home so we can all get through this.