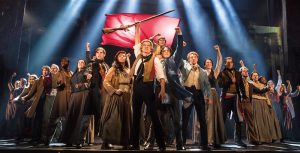 On this day in 1987, Les Miserables opened at Broadway’s Imperial Theatre and would play for more than 4,000 performances.

To date, I think I’ve seen the stage version of this show six times. It may be five.

I’m old and my last math class was when Richard Nixon was still in the White House.

Needless to say this is one of my, if not the most, favorite stage musicals.

I have to say one of because none of you have bought me tickets to Hamilton, and no one has (yet) cast me as Edna Turnblad.

I dreamed a dream.

It’s only Thursday and the world is going just a little bit crazy.

That’s why stories like Les Miserables resonate with us. It’s a story of despair and redemption.

And, let’s face it, it’s also a story of secrets.

Not to spoil anything (if you haven’t seen it after more than 30 years, you can hardly call this a spoiler), but Jean Valjean doesn’t tell his family about his real background until the final few measures of the show when he’s about to join a posthumous trio.

Trivia: During one of the performances that we saw at the Kennedy Center one of the silver cups the priest gives to Valjean rolled off the stage. The conductor looked up and without missing a beat, caught the cup and set it aside.

I wrote this when we saw the movie:

The story of Jean Valjean’s redemption is the story of the grace of God.

Timeless. Eternal. And grace that can redeem from the lowest depths.

Spend a few minutes on Twitter and you’ll be reminded that we call could use a good dose of redemption.