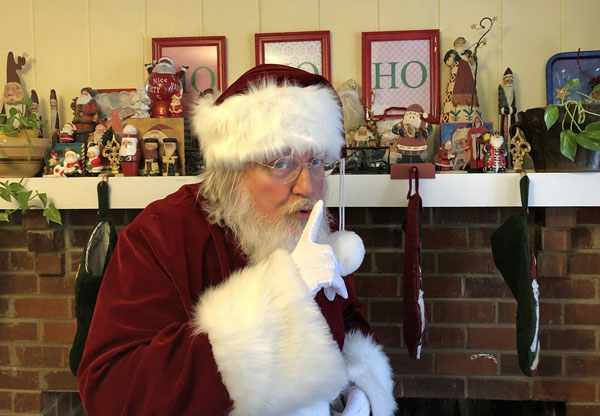 It’s two days before Christmas and I could write about the things I’ve not yet accomplished in preparation. The house is finally decorated. Don’t judge, I’ve been a busy boy.

It’s all good. It will happen.

As you may recall, I’ve been spending most of my time being a jolly old elf at Kings Dominion’s Winterfest. We’re there through January 1, so get your tickets.

Truth be told, the first time I was cast as Santa in a church production nearly twenty years ago, I sort of resented it. I mean, yes, I’ve always been “big-boned” so to speak. But I was much younger and my hair was still, mostly, brown. That time I had to use the fake beard and wig.

Even the first few times I portrayed Santa with my real beard I had to use some theatrical makeup to lighten it. I don’t really need that now.

In fact, the beard is so white and (currently) long that I often get recognized. Or at least stares. Wearing red in public can be fun, or dangerous.

In all of the list of things I thought I might do when I grow up (still a work in progress), I don’t think that being Santa was ever among those dreams. It’s one of those things that I came to by accident.

No, I don’t mean that Santa fell off the roof and I put on the suit. More that it came around as opportunity. Not something I was seeking.

That’s changed and this year, in addition to my gig at Kings Dominion, I’ve been doing Santa appearances around the city. As I write this, I have one more private visit scheduled for the year and will be off in just a few.

I have long thought that my retirement job was writing the great American novel and brilliant blog posts. It may still be (more details to come in the very near future).

Then theater opportunities started happening, and working (retail, not entertainment) at the amusement park, and it’s all sort of blending together.

As I write this, I’m making a list and, of course, checking it twice, to determine just exactly where I take this next year.

This year, I purchased my own red suit and am already making a list of things I want to add or modify for next season.

And, should you wish to contact the Jolly Old Elf, you may do so at SantaMikeRVA@gmail.com.

I started this as an actor. Over the years, I’ve played many characters. I have also on occasion been something of a character, but that’s a different story.

So, I never really thought about becoming Santa. It was just another acting opportunity.

But, there’s something magical about putting on that red suit. Some sort of transformation happens.

This is a work in progress. I hope to learn more over the next year. Hopefully, I’ll get to a Santa school and, by next season, I’ll be even better at this.

I’ll be back next week to talk more about the blog and the future of the writing plans.

But before that, there are cookies to eat and milk to drink.

Have yourself a Merry Little Christmas.