It’s October 2nd. For years, well maybe at least once or twice, I’d have a post about how quickly September had gone and how I wasn’t quite sure that I was ready for October.

Well, it’s too late for that.

It’s from the musical The Fantasticks. I saw a fine production of that show over the summer. I must admit though that it’s not one of my favorites.

I apologize for nothing. 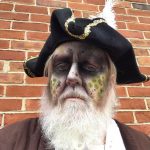 I’m in the middle, or the early beginnings of working as a Haunt Monster, or scaractor, if you will, at Kings Dominion.

It’s exhausting, but I’m having a blast. Although, truth be told, sometimes the scariest aspect is my costume after six hours in ninety-plus degree temperatures.

In the meantime, I’ve got my rehearsal schedule for Winterfest. I’ll be back in Tinker’s Toy Factory. Those rehearsals start the week after Haunt ends.

I have two shows, well, actually three, that I’m already working on for next year. Details when it’s time.

And yes, I’ve been doing some writing. Just not here.

I’ve written a script that needs a lot of edits.

I’ve written a one-act as part of a project for Richmond Playwright’s Forum.

I’ve written a post (coming soon) for a writing contest.

I continue to write at least a thousand words a day. Sometimes I write good ones.

And, in the best of all news, my play Clean Dry Socks: Diary of a Doughboy is available for purchase on Amazon.

So, you see, I really do have reasons (not excuses) for not posting here.

I’d say that I’m going to try to do better, but I’m not a politician and I don’t do empty promises.

Speaking of politics, if I haven’t said this before Twitter is a cesspool.

So, October. I’ve lowered my standards for yard care. No, seriously, they can go a little bit lower. I’ll get the leaves out of the front yard, or at least mow them under. The back will be more mulchy. It’s healthier that way. No, seriously.

If there are summer regrets, I didn’t see enough beach. We’re already making plans to fix that for next year.

If there are fall regrets, I’m not sure when I’ll be able to light up the fire pit. It will probably have to be a weeknight which seems a bit weird. But, we’ll make it work.

In the midst of all that, I have some October goals.

At least one firepit. Because I believe by faith that the temperatures will eventually drop.

Watch It’s the Great Pumpkin, Charlie Brown, at least once.

Watch Young Frankenstein, at least once.

And, I get to see The Rocky Horror Show on stage this month, among other things I’m trying to get out to see.

So, busy. But, a good busy. As I’ve said before, nothing is on my calendar that I didn’t put there.

I’ll write here when I can.

If you want to encourage that, feel free to send me your leftover chocolate.