Today we honor the birth of Martin Luther King, Jr.

On August 28, 1963, when I was just five-years-old, King delivered these words on the steps of the Lincoln Monument in Washington, DC. The full speech can be found here.

I have a dream that one day every valley shall be exalted, and every hill and mountain shall be made low. The rough places will be plain and the crooked places will be made straight, “and the glory of the Lord shall be revealed, and all flesh shall see it together.”

And when this happens, and when we allow freedom to ring, when we let it ring from every village and every hamlet, from every state and every city, we will be able to speed up that day when all of God’s children, black men and white men, Jews and Gentiles, Protestants and Catholics, will be able to join hands and sing in the words of the old Negro spiritual: “Free at last. Free at last. Thank God Almighty, we are free at last.”

As a sixty-year-old (you have picked up on that, right?) white, southern, Christian, male, I realize that any opinion I offer must be snarked at, discredited, or simply labeled as wrong by today’s politically correct standards.

This is not a case of “Help! Help! I’m being oppressed,” because I’m not. But if you can’t see that there’s a growing animosity toward people like me, then you’re either woefully ignorant, or lying.

And that’s not where I intended to go with this.

This weekend, on those very same steps, we saw a different type of display. You’ve seen the video. You’ve pre-judged either one side or the other. And it’s likely that you, along with most of the rest of the country, had a knee-jerk reaction to what took place.

I won’t vouch for or endorse the commentary on these links, but the videos sort of speak for themselves. What we saw at first was not exactly what happened.

What Really Happened at the Lincoln Memorial?
Think Liberty

Have We Finally Lost It?
The Axis of Ego

Read the links, make your own, informed, decision. There are dozens of videos and hundreds of posts out there.

On a weekend when I think we were supposed to be talking about football playoffs, and worrying about an arctic blast (full disclosure, I’m writing before the temperature drops), we dive into national hysteria over not one, but two highly questionable stories.

The other, of course, being the Buzzfeed story that was sure to bring down the President, until Robert Mueller’s office said “uh…that’s not what he said…” 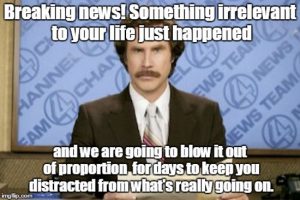 On yet another side note, how many stories have we seen that had social media light up with the words “Trump is finished?”

I posted on Facebook the other day that, while I’m no Trump fan, I love how he’s driving his opponents bat-crap crazy. Because the reality is, that’s exactly why he won. Yet none of his opponents seem to realize that.

It’s like Dennis Miller says a few times a week, “You know what I’ve noticed? I don’t think the Democrats have handled Hillary’s loss as well as they could have.”

To badly paraphrase Dr. King, I have a dream that one day we’ll all wait for the rest of the story before jumping to conclusions. Admittedly, some days that’s all the exercise I get.

I know long term readers are out there thinking “He said he wasn’t going to write about politics.”

But if politics is what you get out of this, then I’ve not made my point.

We’ve gone beyond sharing celebrity death hoaxes, or misleading (and grammatically frickin’ incorrect) Facebook memes, or even the “I know people won’t read this” type of posts.

I get it. We’re all a little on edge. We’re all worked up, well except our elected government, they’re not really working at all. And that’s a shame.

We could all use a little more self-control.

We could all remember that just because we saw a video on the Internet, we may not have the full story.

You know I’m struggling here with writing about things that are relevant to sixty-somethings like me, and the ongoing to struggle to avoid wading back into politics.

But there are times like this when I just can’t be silent.

Today, all across the country people will be quoting Dr. King with the statement:

The trouble is. He didn’t say it. Not exactly like that anyway.

On March 8 1965, the day after “Bloody Sunday” when civil rights protesters were beaten by police on the Edmund Pettus Bridge:

It’s hard for someone who spent years working in the political realm. I struggle these days to make the world a better place through the arts and through the things I write.

But, how do I stand up for what is right without being drawn back into the screeching?

Let’s face it, most people don’t want to hear the truth if it contradicts their pre-determined prejudices. The examples above over this past weekend’s events on the Mall prove that.

The best I can do is hope that maybe somewhere out there, someone will see this message, and the next time an inflammatory video or quote is posted on the Intertubz (regardless of the source or the subject), that someone will say “wait…before I react…”

It’s up to each of us one by one to guard our own reactions.

I have a dream.