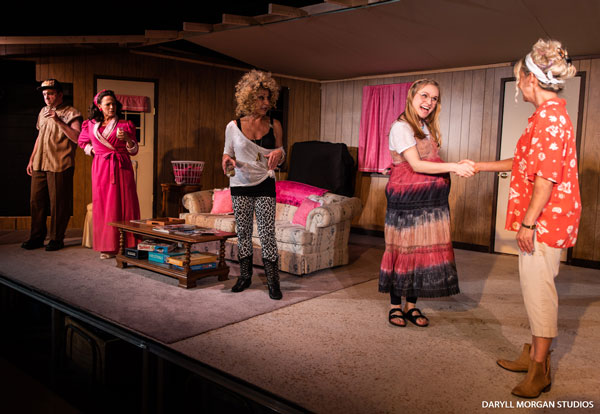 Did you remember to pause and be thankful for those who have given the ultimate sacrifice in defense of our freedom? That’s what Memorial Day is.

Independence Day (everybody has a Fourth of July) is when we celebrate our Declaration of Independence from Great Britain. Veteran’s Day is when we honor all veterans.

Pretty simple really. But sometimes in all the hoopla of sales and picnics and pool openings, things get a little fuzzy.

I don’t have time for things to get fuzzy this week. If you’re reading this on Tuesday morning, as you should be, then I have exactly three rehearsals, one of which is an Invitational Dress Rehearsal (IDR) for Doublewide, Texas.

And when that curtain goes up at 8:00 p.m., I’m done. At that point there’s nothing left that I can do for the show. Good or bad. Right or wrong.

Years ago, when I was a Meetings and Convention planner in DC, I used to plan five-day annual meetings that would have somewhere between 1,000-2,000 attendees. The final event was the annual awards banquet. I knew when that banquet began that, other than the cleanup and the going home and the paying the bills, I was done. There was nothing else I could do.

The catering staff knew that the bottle of red wine went immediately to the right of my spoon.

Then, I remember that one time in Seattle when the convention center staff, and meeting attendees kept sending drinks to my table. At one point there were some 6-8 glasses in front of me. Granted, at least one of them was water.

No, I didn’t finish them all. But I did dance very well that night.

No one will be putting a glass of red wine by my seat in the theatre on Friday night. There will be wine at the Opening Night Reception, but I don’t think I’ll get close to six or eight glasses.

But, like I said, when the lights go up on stage it’s out of my control.

Truth is, I’ll be letting go after the Thursday night dress rehearsal.

The realization of that hit me last week.

I’ve lived with this play and these characters for the last year. And I’ve worked with these actors and this crew since March.

On Friday night, my work, other than showing up for strike, will be done.

They’re ready. I’ve no doubt about that.

I’ve done the best I can. I’ve been blessed with an incredible cast and crew.

You will be missing out if you don’t see this show.

But, I think back to nearly four years ago when I found it quite difficult to say goodbye to Sherlock Holmes: The Final Adventure and the quote that summed it all up.

I’ll be saying goodbye to Doublewide, Texas, but there are other projects ahead.

Two that I know of and can speak of…

There’s more in the works, along with the novel, and maybe at least one more script.

But, for now, I’m going to enjoy the rest of my time in a little trailer park outside of Tugaloo, Texas.

By the way, I’m still pacing myself on the posts here. I’ll be back on a regular basis soon.