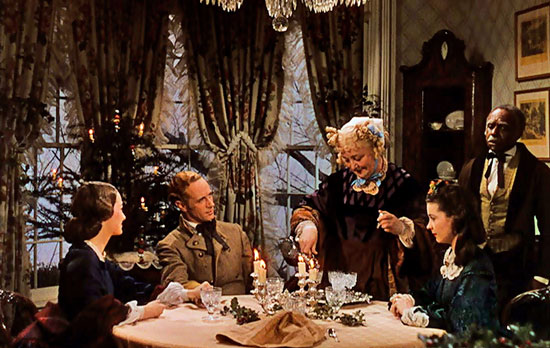 Aunt Pittypat: Let’s not talk about the war. It’s Christmas. Let’s talk about Twelve Oaks, and Tara, and all the times before the war.

Scarlett Hamilton: Can we have the wine, Aunt Pittypat?

Aunt Pittypat: Why did you say there wasn’t enough, Uncle Peter? There’s plenty. It’s the very last of my father’s fine Madeira. He got it from his uncle, Admiral Will Hamilton of Savannah who married his cousin, Jessica Carroll of Carrollton who was his second cousin once removed and a kin to the Wilkeses, too. I saved it to wish Ashley a Merry Christmas. But you mustn’t drink it all at once because it is the last.

Ashley: I meant it, my dear. It was a lovely Christmas gift. Only generals have tunics like this nowadays. Melanie quote: I’m so happy you like it, dear.

On this day in 1939, Gone with the Wind, which remains the highest grossing film when adjusted for inflation), premiered at the Loew’s Grand Theatre in Atlanta, Georgia.

I’ve never really taken anything very seriously. I enjoy life because I enjoy making other people enjoy it.

American actor, writer, director, and comedian, Tim Conway, was born on this day in 1933.

Tim Conway remains one of the funniest comedian and actors in the business. The laughter and joy he brought to The Carol Burnett Show, particularly when working with Harvey Korman, is timeless.

You have to think that Conway didn’t take himself seriously because he was just so darned good at comedy.

Then again, doing comedy well is a serious business.

Regardless, Conway is one of a kind.

Here it is Friday and Christmas is just ten days away.

If you were here yesterday, you know what that means. Today is my last post until New Year’s Eve.

Maybe it’s much too early in the game…

But, if 2018 is going to be about living more intentionally, focusing on the important things, and getting rid of the clutter, then I need to take the next few days off from writing here.

I realize that you’ll miss the daily brilliance all wrapped up in a holiday bow, but maybe Santa will leave you something under the tree to take its place…temporarily.

Seriously though, take some time over the next few weeks to slow down and relax. Enjoy the season.

It’s a bit cliche, but sometimes presence is more important than presents.

Watch that holiday movie, have that second glass of nog, drive around and see the Christmas lights.

Um…maybe see the lights then have the nog.

It’s not all about what you can buy.

In the quiet times I find over the next couple of weeks I’ll be thinking about next year. I’ll be reassessing the writing goals.

I’ll be getting back on track with the health goals. Because, dangit, I’m on my sixth round of antibiotics. I’m all for wanting peace in the Middle East, but I’d be happy with a cease fire between the antibiotics and the probiotics. You don’t want the details. Let’s just say I’d be happy to find a clean bill of health under the tree.

I mean if Carol Brady could get her voice back…

Remember why there’s a holiday.

Go to church. Sing some carols. Spend time with family.

And, if you’re the resolution making type, make one to visit here more often. I’ll try to make it worth your while.

Until then, have a the merriest of Christmases.