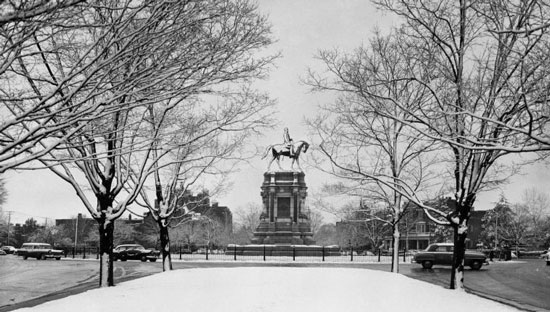 I’ve talked myself out of writing this post many, many times.

Richmonder Arthur Ashe is the first, and currently only, African American to have his own statue on Richmond’s famed Monument Avenue. Monument Avenue is known for its architecture and its monuments to Virginia Civil War heroes.

Tennis player Ashe was also the first and, so far, only African American to win the singles title at Wimbledon, the US Open, and Australian Open. Ashe underwent open heart surgery in the early 1980s where it is believed he contracted HIV from a blood transfusion. After announcing his illness, he founded the Arthur Ashe Foundation for the Defeat of AIDS and the Arthur Ashe Institute for Urban Health. He died of AIDS-related pneumonia on February 6, 1993. He was posthumously awarded the Presidential Medal of Freedom by President Bill Clinton.

In 1996 the City of Richmond honored Ashe with the statue on Monument Avenue. The Ashe statue is the one where 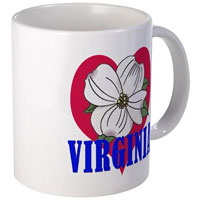 he’s using his tennis racquet to beat away the children who are trying to steal his books.

If you’ve kept up with the news at all you know why I’m hesitant to write this post.

As I said, Ashe shares Monument Avenue with a number of Confederate heroes.

We’ve already had the removal of Confederate statues in Louisiana, and continuing attempts in Charlottesville to remove statues of Robert E. Lee and Stonewall Jackson and to rename a park named in their honor.

They are wrong to do so.

Let’s review some facts about the War of Northern Aggression.

I am not defending the Confederate flag. Don’t hyperventilate and get ahead of yourself.

While it’s true that many, if not all (I’m not doing the research again) of the state resolutions to secede listed slavery as a main cause, it was not the only cause. And not every southerner was fighting to defend slavery.

If you’ve lived in some fantasy world where all the southerners were slave-owning racists and the northerners were open-minded abolitionists wanting to diversify their neighborhoods then you really do need to read some more history.

Let me pause for a full disclaimer here. I am a descendent of slave owners. I have a will from the early 1700s that lists an ancestor as the owner of eight slaves. I also have ancestors who fought for the Confederacy, but by that time they were living in the mountains of Southwest Virginia and that generation no longer owned slaves.

It’s an ugly history. But it’s a history we forget or erase at our own peril.

As a Virginia Tech fan, I long ago accepted the fact that I can’t do much to help Charlottesville, so they’ll have to figure that one out on their own. Here in Richmond, Mayor Levar Stoney has put together a commission to study the statues and determine a way to consider them in context. Stoney has rightly said that the statues will not be removed.

If you’re not from Richmond, the statues on Monument Avenue include:

Nobody asked me, but I would have voted to add Maggie Walker to Monument Avenue. She was an African-American teacher and businesswoman and the first female bank president, of any race, to charter a bank in the United States. A statue in her honor is set to be revealed on what would have been her 153rd birthday, this coming Saturday in Richmond’s historic Jackson Ward near the Maggie Walker Home and National Historic Site.

What I’m saying is that there’s more room on Monument Avenue.

But, let’s get back to the issue of removing what’s there.

Yes, they remind us of a painful and ugly era of our history. That’s why they should stay.

I am not qualified to speak to how these monuments may or may not offend my brothers and sisters of color. I am not discounting their feelings or their beliefs.

I simply believe that the efforts to…whitewash if you will, our history are ill-advised.

Beyond that for just a minute, think of the economic costs.

The last report that I saw had the cost of removing the Charlottesville statue at somewhere around $700,000. Maybe it’s just me, but I would think that Charlottesville could find a better use for that money. I know Richmond could.

But speaking of money, those monuments, along with the battlefields and other historic sites generate a lot of revenue for the Commonwealth.

According to Virginia Business, the Civil War’s 150th anniversary had an economic impact of $290 million. That included some 3.7 million visitors to Virginia which brought in some $8.4 million in state tax revenue and nearly $5 million in local tax revenue. Overall, that supported nearly 3,500 jobs.

We need to remember our history so that we don’t let it happen again. Removing the statues will not erase racial tension. In fact, as we’re seeing in Charlottesville, it just may increase them.

Just last week we celebrated the Declaration of Independence.

We hold these truths to be self-evident, that all men are created equal, that they are endowed by their Creator with certain unalienable Rights, that among these are Life, Liberty and the pursuit of Happiness.

The Founding Fathers were on the right track, but we know they weren’t quite there.

It was a start.

Nearly one hundred years after that, some 620,000 men gave their lives in a fight that held that argument at its very core.

It would take nearly another 100 years for the Civil Rights Act to be passed.

It’s been a painful, and ugly, journey.

But if we forget where we’ve been, we’ll never really know where we’re going.

Virginia Democrats Call On Republicans To Repudiate Democrats
The Jeffersoniad
The better question is this: why are Democrats asking Republicans to condemn a terrorist organization formed by Democrats themselves?

Charlottesville’s Robert E. Lee statue vandalized before KKK rally
The Daily Progress via Richmond Times-Dispatch
Charlottesville police said the paint, as well as black graffiti, was reported overnight. No arrests have been made.

The Conservative ‘Resistance’ Is Futile
The Wall Street Journal
Some conservatives have the impression that, by showing off their anti-Trump hostility, they will get the networks and the New York Times to like them. It doesn’t work like that. Although the right reads the left, the left rarely reads the right.

Trump, Polish president bond over disdain for ‘fake news’
USA Today
President Trump believes he has found an international ally in his crusade against the media.

American singer-songwriter, producer, and actor, Arlo Guthrie, was born on this day in 1947.