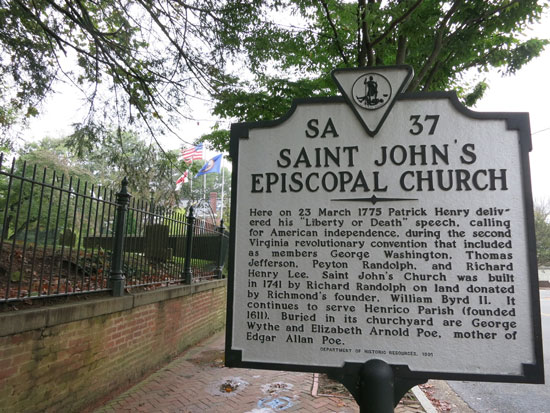 Is life so dear, or peace so sweet, as to be purchased at the price of chains and slavery? Forbid it, Almighty God! I know not what course others may take; but as for me, give me liberty or give me death!

On this day, American revolutionary, Patrick Henry, later to be the first governor of Virginia, gave his famous speech at St. John’s Episcopal Church, right here in the good old RVA.

That’s Richmond, Virginia in case you needed to know.

I’m not going to take this analogy too far, but let’s just say that I’ve done more than my fair share of barge totin’ and bale liftin’ in recent years.

I mean sure, as I’ve talked about, we all have our struggles.

But face it, none of us in this country are currently facing anything like what Patrick Henry and his compatriots faced when they decided it was time to declare independence.

No matter what you think of our current President, you really can’t draw (too many) parallels with King George.

We’re just not going down that road at all.

But when I think of Patrick Henry and the courage of his convictions, I wonder if I would indeed have that much faith, that much courage, that much strength to carry out my convictions in the face of what would be almost certain death.

Then I remember that I get antsy if the Starbucks line is too long.

Remember the comedian who said during the first Gulf War that the residents of the Middle East were dodging bombs and we thought it bad because we couldn’t park in the white, no loading zone at the airport?

I’m not saying we’re a bunch of wimps. Well…maybe a little.

I think the thing about the human spirit is that it rises to the challenges of the day. Sure we have it a lot easier but we’re not without challenges.

That’s why I try to understand when people freak out over things I think may not be such a big deal. It’s all perspective and it’s all what we’re dealing with at the moment.

That being said I do think that on a percentage basis there are a lot fewer of us these days who would take a bold stance like Patrick Henry.

Thank God for the men and women who wear the uniform so that the rest of us are free to be couch potatoes.

And, thank you Patrick Henry, for standing up on that day some two-hundred and forty-two years ago and fanning the flames of liberty.

Not quite so many years ago on this day in 1929 my father was born. I would regret going through this day and not mentioning that here.

He died at age 49, ten years younger than I am now. I was 20 at the time. I have now lived almost twice as long without him as I did with him.

It’s particularly poignant this year after losing my stepfather in October. He was my stepfather for more than thirty years and my uncle before that. If you know the story, you know. It’s not quite a southern thing.

I was reminded this week that, on this same day in 1983, I lost another uncle on my father’s birthday. My father and my stepfather both defended our freedom in the military, and my uncle James spent his entire adult life in service to his country.

I didn’t have long enough with any of them.