Remember that every government service, every offer of government – financed security, is paid for in the loss of personal freedom… In the days to come, whenever a voice is raised telling you to let the government do it, analyze very carefully to see whether the suggested service is worth the personal freedom which you must forgo in return for such service.

I don’t know what Ronald Reagan would have thought about social media. In many ways I think he would have looked at what we’re posting online and just rolled his eyes and said something like “Now why would you want to put that out there for everyone to see?”

And, as an aside, no matter how many times you post that “legal” notice on Facebook, you are not preventing them from gathering, storing, and sharing your information. You consented to that when you opened an account and lied about reading the terms and conditions.

Face it, we all did.

The bottom line on most of social media is that if you don’t want the information out there, don’t put it out there.

I’m not sure there’s a way to do that completely other than going off grid and living completely free of most of the rest of society.

Thing about government is that if we want them to give us something, we’re going to have to be willing to give up something in exchange.

There really is no free lunch.

Much of the problem with government has come because of the unintended, and unforeseen consequences of the next “great” program.

Pick a program. Pick an issue. I can just about guarantee you that somewhere along the way someone said “Oh, I 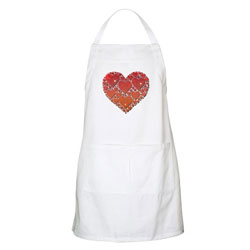 Serve it up in love with this apron and more from The Write Side Shop (click the pic).

didn’t realize THAT would happen…”

Reagan understood that government was not the solution.

Oh don’t go there. Not all forms of government are bad. Not all government programs or agencies are bad.

But most went further, and cost more, than orginally imagined.

Gerald Ford, another great president who was highly underrated said to a joint session of Congress just after becoming president in 1974:

Bigger, when it comes to government, is not better.

So, the next time you think there’s a government solution to a problem, stop and ask yourself if the problem, or issue, can be dealt with outside of government intervention.

And if you decide it can’t, ask yourself what you’re willing to surrender.