Man is not free unless government is limited.

Your opinion may vary, but that’s the way it is on my blog.

I lived in Washington, D.C. during the last three years of the Reagan presidency. Those were great times to be a young conservative in the nation’s capital. I was working for an association of state legislators where I had the privilege of working with the policy office and of planning events where the President would meet in the Old Executive Office Building with about 150 state legislators.

We also had the opportunity to hear him speak on other occasions. One favorite memory was when he spoke on my birthday at the Jefferson Memorial in 1987. It wasn’t just for my birthday, it happened to be the day before Independence Day. In 1994, after I had just returned from the Super Bowl in Atlanta where I was working for Jack Kemp, my wife heard President Reagan speak at a dinner with Margaret Thatcher.

True story: After both of those events we had twelve dollars in the bank.

Our years in DC gave us many wonderful opportunities. I miss those days, and I miss the leadership of Ronald Reagan. He knew how to get the job done and still managed to get the Loyal Opposition to like him, even in their bitter disagreements.

Was he perfect? He would have been the first to tell you that he was not.

But he was pretty darned good.

Reagan understood that people were more free, were more resourceful, were more creative when the government got out of the way.

Wherever you fall on the political spectrum, what we’re seeing in Washington today is a realization that government has been in the way for a long, long time. I’m not sure the slash and burn method is the right way to deal with things. But maybe it is. Time will tell.

I’m not going to point fingers, hell, maybe I am, but I love the quote going around Facebook this week.

Love trumping hate involves a lot more assault and arson than I thought it would.

Not to mention the anger. 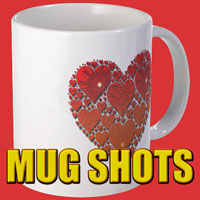 Check out my latest CafePress venture and get your own personal #morningcup. Mug Shots. (click the pic)

because they didn’t want to hear from a gay immigrant?

Lot’s of folks this week are saying they want the politics out of the Facebook threads. I personally have found the unfollow (but stay friends) option to be a life, and blood pressure, saver.

But complaining about it and asking people not to post politics isn’t the answer any more than the rioting and the arson.

We can’t control others. We can only control our own actions and reactions.

On this week of what would have been his 106th birthday, I plan to celebrate a week of Reagan. Back in 2011 for this 100th I did 28 Days of Ronald Reagan. You’re getting the abridged version this week.

Come back tomorrow. It will do you good.