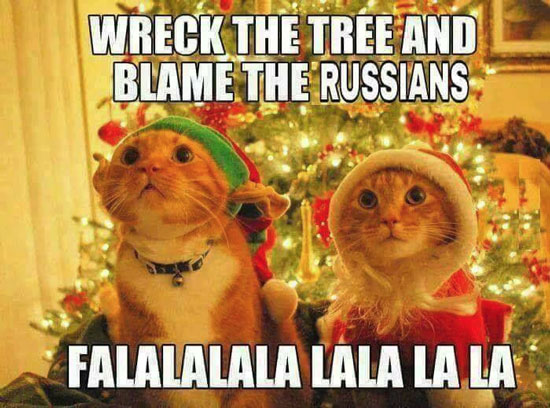 One man’s ways may be as good as another’s, but we all like our own best.

You have one week. Okay, technically a week and a day.

Christmas Day is coming and neither you nor the Grinch can stop it.

Even with wanting to scale things back and make things simpler, I still have a lot to do.

I still have leaves in my yard that were, in theory, going to be dealt with tomorrow. I think Mother Nature has a different idea.

The irony of an office holiday gathering when it’s gathering at the office from which you need the holiday.

It was a nice luncheon and the food was good.

In the meantime, I keep hearing about Russia supposedly tampering with the election.

I’m not really going to get into it, but let’s consider the following:

Wikileaks said they didn’t get their information from Russia, but from a Democrat Party insider.

Nobody I know that voted for Trump did so because of the Russians.

We were assured ad nauseum before the election that the ballots were safe.

This information about the Russians was out there months ago, but it only heated up in the media and on the Interwebz after the recounts still went to Trump.

So, really, it’s time to accept the fact that Donald Trump is going to be the next President.

I didn’t say you had to like it. He wasn’t my choice.

The election is not going to be overturned.

Besides, with Russia controlling the White House, think of all the fashion options you will have.

And, as I said to a friend on Facebook, dibs on the vodka.

What I’m realizing is that we’re going to spend the next four (at least) years with the left and the media jumping on every little move Trump makes.

Frankly, I think he knows that and whilst you’re off being hysterical he’s going to get some work done.

Disagree with him all you want. But saying he’s not your president or that he’s not the legitimate president, or even that Hillary won the popular vote isn’t going to change anything.

And when Rick Perry abolishes the Department of Energy you’ll be in a world of hurt.

All I’m really saying is that I hope this hysteria calms down and people try to figure out how to work together. Disagree on policy, absoulutely. But screaming and whining and protesting isn’t going to change things.

Christmas is but a week away. I’m going to do my best to ignore the news, at least the political news. There are things happening that we shouldn’t ignore.

For example, stop for a minute and offer a prayer for Aleppo. It’s a mess.

But, this is also the Season of Hope.

Then pealed the bells more loud and deep:
“God is not dead, nor doth He sleep;

The Wrong shall fail,
The Right prevail,

With peace on earth, good-will to men.”

Let that be your Christmas prayer.