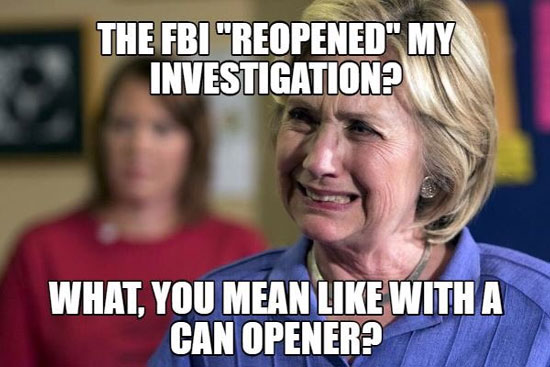 I don’t want Hillary Clinton to be President.

At the same time, I don’t want Donald Trump to be President.

I’ve already told you that. Twice.

But seriously, day after day, as there’s a new revelation about Hillary via WikiLeaks and Friday’s news that more relevant emails have been uncovered…this time on Anthony Weiner’s laptop.

And we know what kind of emails he sends.

It’s just a mess. And I’m sorry, no I’m not, this woman has no business being President. Not only do I think that, if she’s elected, and I still don’t see how she’s not, her policies, her appointments, her governance will be atrocious, but we’ll be faced with four years of 24/7 news of scandals, and conspiracy theories, and anger.

Don’t think that my dislike for Ms. Clinton is because she’s a woman, that kind of narrow-minded assumption doesn’t make me the sexist in the equation.

You do the math, because I don’t do math. I haven’t had a math class since Richard Nixon was in the White House.

Let’s be clear. As much as she and her campaign will try to deflect this mess, there’s only one person to blame. It’s not Donald Trump. It’s not James Comey. It’s not Anthony Weiner.

Wouldn’t there be some irony if the woman who worked on the Watergate investigation that led to the Nixon’s resignation became the second President to resign because of scandal, or even indictment?

“What did the President email, and when did she email it?”

So, you see my dilemma. This woman can’t be President, and yet she probably will be. Although as of this writing, polls are trending Trump’s way.

What a mess we’ve gotten ourselves into.

As someone who has spent his entire adult life entrenched in politics and government this is on some levels fascinating.

But it’s painful because I see no good outcome to this process. Both of the top choices are bad ones.