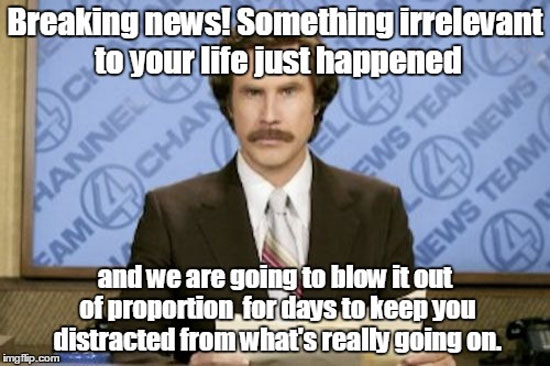 You can’t make up anything anymore. The world itself is a satire. All you’re doing is recording it.

American soldier and journalist Art Buchwald was born on this day in 1925 (died 2007).

I don’t know that Art Buchwald was a prophet, but man is that quote spot on, especially this year. I do remember reading, and enjoying his columns.

Seriously though folks, has this not been a strange year?

I mean we’ve all talked about how we’ve never quite seen an election cycle like this.

But add to that all of the celebrity deaths, we’ve had more than a few.

And all of the rest of the craziness that’s going on.

I don’t know. Maybe it’s not so much that life is any weirder than it used to be. Maybe it’s just that we’re bombarded with everything and everyone 24-hours a day.

That’s pretty bipartisan, I think we can all agree on that.

And if we can’t, then you’re just wrong.

I don’t watch television news. I used to. But the endless cycle of the same story over and over…well…

Because that’s the thing.

If you post something that says “Some of you won’t read this”…well, you’re right, I probably won’t.

If a post shows up that says “You won’t believe what happened when…” then I probably won’t because I’ll never see it.

Life is crazy enough without people making up stuff.

Take the elections, if we must, there’s enough bad stories on both sides. We don’t need anyone making stuff up.

And we have to weed through it to determine what is real.

I’ve pretty much stopped trying to be the Facebook police. Sometimes I can’t help myself and have to point out that something is a hoax, or it’s coming from a made up “news” source.

Look, I can’t fix this for you. I can’t stop the crazy, either the true stuff or the made up stuff. You’re going to have to do some of the heavy lifting on your own.

But if we all strive for a little more sanity in our own realms, maybe things will calm down.