We’re all a mess 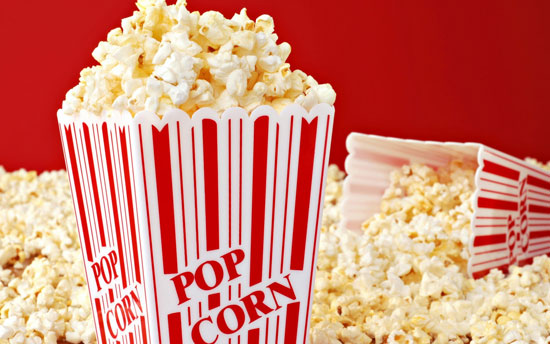 When I wrote last week about watching the Republican Party implode, I wasn’t sure if I’d be talking politics again on this Friday. But, after a week like this, how can I not?

I mean, I’m a writer, but I couldn’t make up more fascinating stuff if I had to.

Consider that the week started out with the news that some 20,000 DNC emails had been hacked showing how party officials were orchestrating efforts to secure the nomination for Hillary Clinton. The story won’t die, nor should it.

The emails were nothing to worry about… 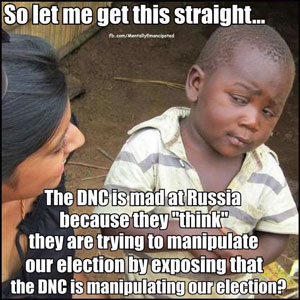 Unless you were Bernie Sanders…

In May, Debbie Wasserman Schultz, using her private email, said: “He isn’t going to be president,” reacting to a statement from Senator Sanders that he would block any attempt at reappointing her. [Yahoo]

Or a Sanders supporter…

Or a Clinton donor…

The documents, which were circulated among top DNC officials in April, could raise legal questions for the party, says Ken Boehm, the chairman of the National Legal and Policy Center, a government watchdog group.

“The disclosed DNC emails sure look like the potential Clinton Administration has intertwined the appointments to federal government boards and commissions with the political and fund raising operations of the Democratic Party,” Boehm told The Daily Caller.

“That is unethical, if not illegal.” [Truthfeed]

...Can we get someone to ask his belief. Does he believe in a God,” reads the email, according to The Intercept. “He had skated on saying he has a Jewish heritage. I think I read he is an atheist. This could make several points difference with my peeps. My Southern Baptist peeps would draw a big difference between a Jew and an atheist,” added the email.

Attached is a script for a new video we’d like to use to mop up some more taco bowl engagement, and demonstrate the Trump actually isn’t trying. [WikiLeaks]

The campaign tried to spin this as a response to Trump’s admittedly bizarre taco salad comment. [Yahoo] But in what universe is it okay to use that terminology?

Or perhaps Russian… Because the first response out of the Clinton campaign was to blame the Russians for the hack. Alright, that’s problematic, but let’s not forget what was actually in the emails.

Or Debbie Wasserman Schultz… who resigned as chair of the party…and immediately joined the Clinton campaign.

Michelle Obama gave an impressive speech on the opening night. Say what you want, but she’s a woman of grace and style, and the audience loved her. Of course not much was made of the fact that she’s completely changed her tune on Hillary Clinton since the 2008 primaries. I didn’t watch the speech (or any for that matter), but this excerpt concerns me.

“In this election, and every election, it’s about who will have the power to shape our children for the next four or eight years of their lives.”

No, Mrs. Obama, that’s the job of the parents, not the government.

Bill Clinton showed up Tuesday night and told a love story. No really, and it was with Hillary. 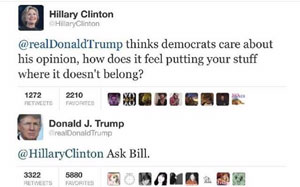 After Hillary was the official nominee she showed up by video and talked about the history making event and breaking the glass ceiling.

Hypocrisy. Look it up in the dictionary. It will do you good.

The emails seemed to have been forgotten when on Wednesday as the media and the Democrats were basking in the glow of Bill’s love story for Hillary, Donald Trump did an amazing thing and held a one hour press conference. You won’t see Hillary doing that. She knows she’s not good when put on the spot. Trump made what he says was a sarcastic comment, and quite frankly I believe him, and asked Russia if they have any of Hillary’s 30,000 emails to release them.

The left and the media went into convulsions.

It was a brilliant move by Trump.

Because suddenly no one was talking about Bill Clinton’s wonderful speech anymore. I mean the love story angle was nice. But no one seemed to care anymore when Trump made that statement.

“This has to be the first time that a major presidential candidate has actively encouraged a foreign power to conduct espionage against his political opponent. That’s not hyperbole, those are just the facts. This has gone from being a matter of curiosity, and a matter of politics, to being a national security issue.” [The Federalist]

So, in other words, Hillary did have classified information in her emails…and she deleted them.

Perhaps Sullivan doesn’t recall that in 1991 a memo was unearthed that implied Senator Ted Kennedy wanted to make a deal with Yuri Andropov the General Secretary of the Communist Party of the Soviet Union. Not Russia. The Soviet Union.

Kennedy’s message was simple. He proposed an unabashed quid pro quo. Kennedy would lend Andropov a hand in dealing with President Reagan. In return, the Soviet leader would lend the Democratic Party a hand in challenging Reagan in the 1984 presidential election. “The only real potential threats to Reagan are problems of war and peace and Soviet-American relations,” the memorandum stated. “These issues, according to the senator, will without a doubt become the most important of the election campaign.”

To the dismay of his supporters who both booed and left the arena during the initial coronation, Bernie Sanders heartily endorsed Hillary Clinton. Before she accepted the nomination Sanders declared that he will return to the Senate as an Independent.

Sure he was elected as an Independent. But did this announcement need to come before the end of the convention?

You can’t make this up.

I’d be rich if you could.

Look it’s no surprise to anyone who knows me that I’m not a fan of Hillary Clinton.

I just have to shake my head however when the Republicans manage to nominate the one person who really could lose to Hillary Clinton…or not…it’s fascinating to watch.

But, if you care for the country as I do, it’s also painful to watch.

Neither party is happy with their choice.

Please, don’t play the game with me. Both parties are trying to put on a good front and wave the flags and drop the balloons. All to pretend that they couldn’t be more excited.

I’m not buying it.

This month’s party conventions have been the most anticlimactic in modern memory – not because we already knew who the nominees were (we did, and we almost always do … this year was no different), or because we have an idea of who is going to win (we don’t and we usually don’t … this year is no different), but because so many of us don’t like either candidate. At all.

Rather it’s like the whole nation has been scheduled for a colonoscopy.

You know you’re going to hate the preparation process, but you know you have to go through with it.

And all you can do is pray that everything comes out okay.