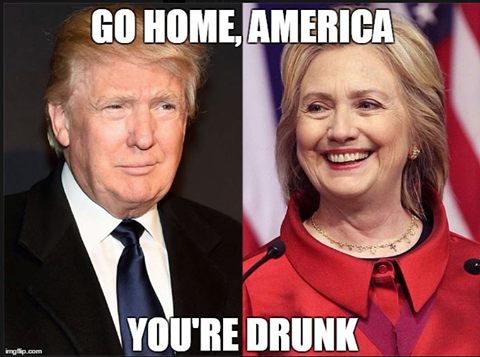 I mean no disrespect, I really do love Fridays and think they’re pretty special.

It’s been another stressful week.

For some of us it’s been watching the party we worked for for thirty-forty years or more implode in Cleveland. Remembering now that, as a six-year-old, I “campaigned” for Barry Goldwater, I can say that it’s more than fifty years.

I mean, on the one hand, I’ve already told you (pretty sure it was more than once) that I can’t vote for Donald Trump. And yes, I realize what that probably means, and no, I’m not happy about that either. For what it’s worth, I’ve also told you that I’ve left the party.

Of all the things we’re seeing out of Cleveland, unity is not one of them. And competence isn’t really high on the list either.

I mean, first the rules fight. Then the Melania Trump/Michelle Obama speech. Then the Cruz non-endorsement.

That’s no way to run a railroad, much less a country.

I did watch about half of the acceptance speech or the acceptance yelling.  I couldn’t stay awake for the balloon drop. He hit some red meat points for conservatives and he was in a take no prisoner mood when talking about Hillary because she’s #toobigtojail.

Let’s be real, Trump appeals to the “throw the bums out” crowd. That’s why he’s been so wildly successful. And that’s why the mainline Republicans got blindsided by his rather spectacular run toward the nomination. Maybe that carries him into the White House. I don’t know.

No, I’m not going to change my mind and vote for him, but maybe his presidency would be less of a disaster for the country than that of Hillary Clinton.

It’s mind-boggling to watch. It’s like the train wreck you want to turn away from but can’t because maybe, just maybe, the train is going to jump back on the track and complete the run into Shining Time Station.

It’s good theater. And only slightly less fascinating than Game of Thrones. But without the dragons and wildfire.

Then again it’s not entirely unlike the Red Wedding.

Lest you think next week in Philadelphia is going to be any less spectacular, may I remind you that some of the supporters of Bernie Saunders are planning a Fart-In.

By the names of the seven gods (Game of Thrones reference, get over it), I am not making that up.

Years from now I suspect historians will look back upon this time as the year when America lost its mind.

We were just too busy playing PokemonGo to notice the warning signs.