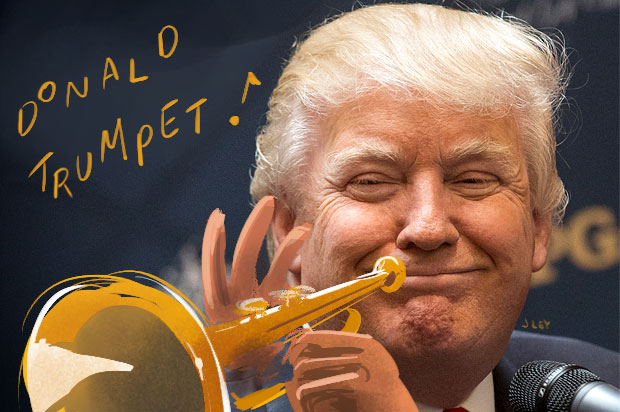 Consider this a bonus, I’m posting twice this week. Don’t get used to it, at least not for a while. I just happened to have my first couple of nights in a good long while without rehearsals. Wednesday night’s being cancelled as a precaution against anticipated storms. I used the time to catch up on graphics projects…and a little line work.

I need a lot of line work.

Speaking of storms, the presidential election is getting pretty tumultuous. It looks like Donald Trump is heading for the GOP nomination. And, even though he has amazing support, it looks as though Bernie Sanders will fail to overtake Hillary Clinton in the Democratic primary. I could be wrong.

What I’m not wrong about, and excuse me whilst I once again go political, is that I absolutely will not vote for Donald Trump. I thought about it. I thought I could pull the lever, or in Virginia fill in the dot, for the GOP candidate. After all, I’ve been voting since 1976 and, even in my years of great doubt, I have always pulled the lever for the Republican candidate in Presidential years.

I probably won’t do that this time.

Honest. I really am trying to stay out of politics, but it’s hard when it fills my news feed.

I mean, give me a break. I gave up sugar for Lent and I have two unopened boxes of Thin Mints on my desk that were delivered this week.

I posted this article Dear Trump Fan, So You Want Someone To ‘Tell It Like It Is’? OK, Here You Go. on Facebook Wednesday and stated:

This is required reading. And, by that, I mean that I will NEVER cast a vote for Donald Trump. Not now. Not ever.

The reasons are many:

“Nobody reads the Bible more than me.” [Christian Post]

Look, I’m no Pope Francis but that seems like a pretty Trumped up claim…so to speak…to say you read the Bible more than ANYONE else?

I mean, really, would some one that familiar with scripture actually claim:

“I like to be good. I don’t like to have to ask for forgiveness. And I am good. I don’t do a lot of things that are bad. I try to do nothing that is bad.”
[Business Insider]

I am often a failure in my attempt to follow Christ. Even after all of these years. But I know, if I believe anything he taught, I can’t vote for Donald Trump.

That’s not me standing in judgement of Donald Trump. That’s above my pay grade.

It’s me making a decision based on my values and beliefs.

I just don’t think I can call myself a follower of Christ and vote for a man who says:

For the record, in case you were wondering, my disgust with that is is comment toward Ms. Huffington.

I find myself wondering how my pro-life friends can support a man who defends Planned Parenthood.

I totally get that people can change their views. Just call me highly skeptical on this one.

Look in full disclosure, I am unashamedly pro-life. I have a lot of problems with how the pro-life message is presented. Personally I don’t think the screaming on either side is helpful. This isn’t about that. It’s about how I just don’t understand how millions (really?) of people who have been fighting funding for Planned Parenthood can just overlook this. It’s almost as if people are saying they’re pro-life except in cases of rape, incest or a threat to the life of the party.

I’m also highly skeptical about his support for Israel. Read RedState and Politico.

I’m no fan of the media, but I have some concerns about a candidate who would say:

There’s a lot to be said about being known by the company you keep. We’ve all seen the videos of angry Trump supporters jeering at opponents or calling them foul names. Don’t get too excited, that really does happen on all sides when emotions get hot. That certainly doesn’t excuse it.

But, while the photo going around of the KKK supporters at a Trump rally turned out to be staged by members of the Black Lives Matter movement, the statement by none other than David Duke (you remember him, don’t you?) was not fabricated.

Duke said, “Voting against Donald Trump at this point is really treason to your heritage.” [BUZZFEED]

I’m a southerner. I have legitimate southern heritage. I may be proud to be from the South, but many parts of our heritage do indeed need to be rejected.

Max Lucado has a great article out: Decency for President. Lucado writes:

I don’t know Mr. Trump. But I’ve been chagrined at his antics. He ridiculed a war hero. He made mockery of a reporter’s menstrual cycle. He made fun of a disabled reporter. He referred to the former first lady, Barbara Bush as “mommy,” and belittled Jeb Bush for bringing her on the campaign trail. He routinely calls people “stupid,” “loser,” and “dummy.” These were not off-line, backstage, overheard, not-to-be-repeated comments. They were publicly and intentionally tweeted, recorded, and presented.

Such insensitivities wouldn’t even be acceptable even for a middle school student body election. But for the Oval Office? And to do so while brandishing a Bible and boasting of his Christian faith? I’m bewildered, both by his behavior and the public’s support of it.

Lucado is right. When there are no nice guys, we all finish last.

I don’t want a Hillary Clinton presidency. I said years ago I didn’t want another Clinton OR another Bush in the White House.

But, from a purely political standpoint, Republicans and conservatives know Hillary Clinton. They know where she’ll stand. And I think another Clinton presidency would only strengthen the Republican hold on Congress. Maybe not initially, but by mid first-term.

I just don’t think we can trust Donald Trump. And I think the Republicans would most definitely lose the Senate, and maybe the House.

Don’t get me wrong. I’m not advocating a Hillary Clinton presidency. (I already said that if you’re paying attention.)

Let’s get the big one out of the way first: Is Donald Trump really going to be the GOP nominee? (Related questions: Am I dreaming? Will I wake up soon?)

The Virginia GOP primary is Tuesday. I’m tossing my vote in for Marco Rubio as I see him as the best of the remaining choices.

I hope to make this my last appearance on a debate stage, we’ll see.

In the meantime, look for me on real stages here: