The James River at Berkeley Plantation

On this day in 1619, thirty-eight colonists arrive at Berkeley Hundred, Virginia. Their charter proclaimed the day “be yearly and perpetually kept holy as a day of thanksgiving to Almighty God.”

The country has been rocked again by the shootings in San Bernardino, California. And of course the usual rhetoric wars heated up immediately with calls for more gun control, and more regulation. And on the other side gun owners saying “but, it’s not us.”

Of course it’s not the average American gun owner.

With all due respect to my gun control friends. You do not go down to the neighborhood gun store to buy tactical gear, assault weapons and material to make pipe bombs. This was well planned and highly coordinated. It is an act of terrorism, pure and simple and I’m not afraid to call it that!

As more facts are revealed, it’s looking like Barrett nailed it. They weren’t Methodists.

California has some of the most restrictive gun laws in the country. Private sales must go through a licensed dealer and are recorded by the state. There is a ten day waiting period. Magazines that hold more than ten rounds of ammunition aren’t legal, nor is the possession of automatic firearms.

It’s the same logic that tells us all Syrian refugees are safe but gun-owning, pro-life, Christians are extremists. Don’t get me wrong, I believe we should be accepting refugees. The real ones. Here’s a great perspective on that [3 U.S. Refugee Laws Everyone Forgets]

Look I’m not asking you to change your beliefs, but we can all tone down the rhetoric.

You know, like the rhetoric that blamed all Christians for last week’s shooting in Colorado. Most pro-lifers and most Christians condemned the shooting. That’s not the rhetoric we heard most from the media.

While I struggle with not becoming too political I’m afraid our current President has no problem turning each and every event into another crusade for more gun control. Last week in response to a question regarding the Colorado shooting at the Planned Parenthood location, the President said:

With respect to Planned Parenthood, obviously my heart goes out to the families of those impacted. I mean, Nancy, I say this every time we’ve got one of these mass shootings — this just doesn’t happen in other countries. [SOURCE: The White House]

I’ll just wait right here for a second whilst you connect the dots.

By the way, outside of the fact that he made that statement in Paris (get it yet?), he’s also wrong.

In terms of the frequency of attacks, the U.S. ranks ninth, with 0.09 attacks per million people. Macedonia, Serbia, Switzerland, Norway, Slovakia, Finland, Belgium and the Czech Republic all had higher rates.

So, maybe the White House could tone down some rhetoric, too.

But I don’t want to talk about gun control today. Okay, I just did, but that’s not my point.

My point instead is the reaction of some of the left and in particular the media. It is hard to tell them apart sometimes, isn’t it? But their most violent, if you will, reactions were not to the shootings but to the Republican candidates and others who offered thoughts and prayers. 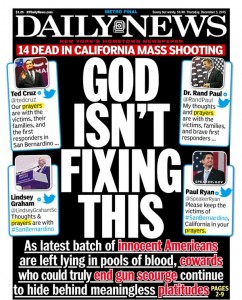 Seriously, Daily News? Have you asked him?

See this article in The Washington Post for more thoughts along the same line.

I admit, when I first saw the headline I felt a little outraged, then I remembered the words of Jesus who said (and I paraphrase), “I told you this would happen.”

“The messengers of Jesus will be hated to the end of time. They will be blamed for all the division which rend cities and homes. Jesus and his disciples will be condemned on all sides for undermining family life, and for leading the nation astray; they will be called crazy fanatics and disturbers of the peace. The disciples will be sorely tempted to desert their Lord. But the end is also near, and they must hold on and persevere until it comes. Only he will be blessed who remains loyal to Jesus and his word until the end.”
– The Cost of Discipleship

How far we’ve come from the days following the attacks of 9/11 when our churches were full. No one was scoffing for calls to prayer in those days.

Throughout our history our nation has always been a nation of prayer.

Every year since that time, the President has issued a Proclamation of a National Day of Prayer. Every President, including Barack Obama, despite, rumors to the contrary.

Our nation has always turned to prayer in times of crisis. In the midst of the Civil War, Abraham Lincoln issued a proclamation for a day of prayer and fasting:

Now, therefore, in compliance with the request, and fully concurring in the views of the Senate, I do, by this my proclamation, designate and set apart Thursday, the 30th. day of April, 1863, as a day of national humiliation, fasting and prayer. And I do hereby request all the People to abstain, on that day, from their ordinary secular pursuits, and to unite, at their several places of public worship and their respective homes, in keeping the day holy to the Lord, and devoted to the humble discharge of the religious duties proper to that solemn occasion.

On October 19, 1917, following the April entrance into World War I, Woodrow Wilson issued a proclamation:

In view of the entrance of our nation into the vast and awful war which now afflicts the greater part of the world…I set apart…a day upon which our people should…offer concerted prayer to Almighty God for His divine aid in the success of our arms.

After the landing at Normandy, Franklin D. Roosevelt lead the nation in prayer on June 6, 1944.

With Thy blessing, we shall prevail over the unholy forces of our enemy. Help us to conquer the apostles of greed and racial arrogancies. Lead us to the saving of our country, and with our sister Nations into a world unity that will spell a sure peace a peace invulnerable to the schemings of unworthy men. And a peace that will let all of men live in freedom, reaping the just rewards of their honest toil.

In the hours and days following the attacks on 9/11/01, the nation’s places of worship were full as a heartbroken people sought comfort and answers.

The faith of our nation is in our motto, it’s in our pledge it’s in our National Anthem. And whether or not we continue to exhibit that faith the history is undeniable. For over 230 years we have been a nation of prayer.

Trouble in this world doesn’t mean that God isn’t in control or that he doesn’t care. It means that we’re a broken people and he wants to restore our relationship.

Saying that we’re a nation of prayer doesn’t mean we are not also a nation of action.  What that action may or may not be can be debated another day.

But neither scoffing at those who pray, or being angry at those who scoff will get us anywhere.  The Daily News headline got attention which it was designed to do.  But it didn’t change anyone’s mind or make the least bit of real difference in the debate.

Yes there is evil in this world and people who pray realize that.

But just because there is evil doesn’t mean that God has turned his back on us. Quite the opposite.