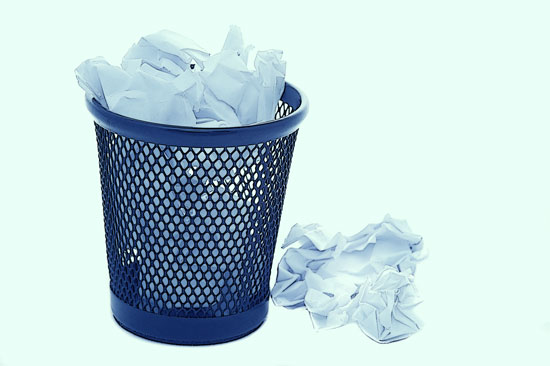 “You must write for the waste basket.”

American singer-songwriter, producer and co-founder of Capitol Records, Johnny Mercer, was born on this day in 1909 (died 1976).

Johnny Mercer was best known as a lyricist, writing the lyrics to more than fifteen hundred songs. He was also a composer and a popular singer. He received nineteen Academy Award nominations, winning four.

I don’t write music. Okay I did write one song way back in Music Theory I, but let’s not bring up that painful, repressed memory.

But I understand what he’s talking about. For all of the fifteen hundred or more songs that Mercer wrote, no doubt countless more lyrics ended up in the round file.

I read all of these “experts” that tell me they’re constantly publishing books and selling thousands of copies. But at that rate, are they worth it?

I don’t know. I don’t have time to read them all. I’m too busy writing my own.

But, I know from experience that I have stacks of files of things I’ve written since way back in high school. There’s some good stuff in there.

There’s also a lot of crap.

And there’s a lot of stuff that will never be read unless some day when I’m long gone my boys have some sort of “Bridges of Madison County” experience and come back to read everything as they’re cleaning out the home place.

Trust me boys. Not worth your time. If it was I’d have sent it to a publisher years ago.

Still, what I know is that have hundreds of pages of things I’ve written that seriously could go in the trash. But in writing them I know that I can recognize what wasn’t right about them, what needed to changed, what needed to be deleted.

It’s all a part of a process.

I would love to be able to sit down and over the course of a couple of weeks type out a best seller.

Not likely going to happen.

What I have to do is keep writing knowing that much of what I write is only valuable as long as there is potential to throw it away.

The more words I put together the better I get at putting together words.

Just like anything in life, it takes practice. It takes repetition.

Sometimes it takes scrapping the plan and starting all over.