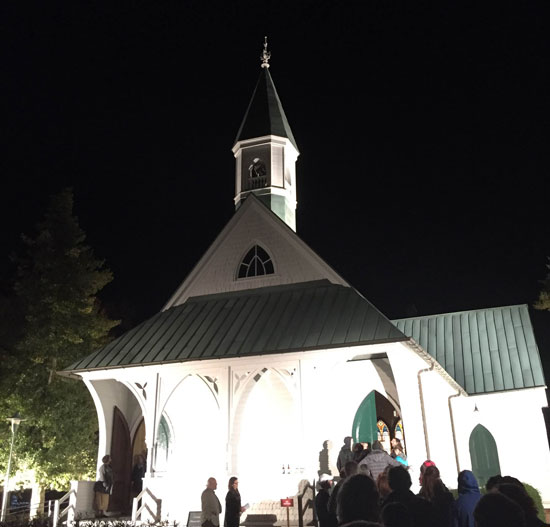 “The Civil War defined us as what we are and it opened us to being what we became, good and bad things… It was the crossroads of our being, and it was a hell of a crossroads.”
– The Civil War: A Narrative

Friday night, very late, the Mrs. and I went down to the Virginia Museum of Fine Arts to view InLight Richmond. We’ve been before and have enjoyed it. We did this time as well.

InLight Richmond is a free public exhibition of light-based art and performances organized by 1708 Gallery.

This year it was expanded to two nights. As you may know if you read here daily (and if not, why not?) our nights in November and December are generally full.

Still, Friday night the display was open until midnight so we left our rehearsal at 10:30 and headed down to the museum.

I’ll be honest, we didn’t think it was the best of years for displays.

And, to be more precisely honest, it was cold and the joints didn’t feel like walking around to every display or going inside the museum.

Two presentations stood out in particular.

One was by a woman from Brazil who is now here at VCU. Her display of shipping crates filled with various materials which were the backdrop for images of women trapped inside the box was a powerful commentary on the horror that is human trafficking.

Yes, I know what was happening in that era. Not the point. This is history.

But back to the present.

One of the displays was a special lighting of the Chapel so that guests could experience it in a big way.

That upset the defenders of the flag. No, not that flag, the Confederate flag.

Their argument was that this was a memorial, not a place for an art display.

So, while folks were standing in line to view the chapel they were over on the street with their flags protesting. They weren’t loud or obnoxious, at least not while I was there.

I’m not defending them or taking up their cause. I’ve written before that I think the flag is only appropriate when displayed in historical context. I’ve also written that it shouldn’t go away specifically because of historical context.

You should read here more often. You would know these things.

But, I’ve also done enough marketing to know that these guys sort of missed it.

First of all, the display in the Chapel was anything but disrespectful. Huge lights shone in from the outside to highlight the beautiful stained glass windows. Inside there were recordings of visitor experiences that I couldn’t quite figure out. But it was the chance to view the Chapel in a respectful way and marvel at the craftsmanship and the art.

It actually enhanced the experience.

Sure I get it if the flaggers thought that there were going to be strobes and Christmas lights. There weren’t.

In reality, hundreds (maybe thousands) of people saw the Confederate Memorial Chapel for the first time (raises hand), and many saw it in a new light. Pun intended.

But not to totally avoid the opportunity to snark, we also observed that these guys lost a major opportunity.

See, they were standing in the dark on the street. A simple slide projector and a floodlight? These guys would have had hundreds of people coming over to see what they were all about.