Save those Dixie cups

And they lived happily ever after 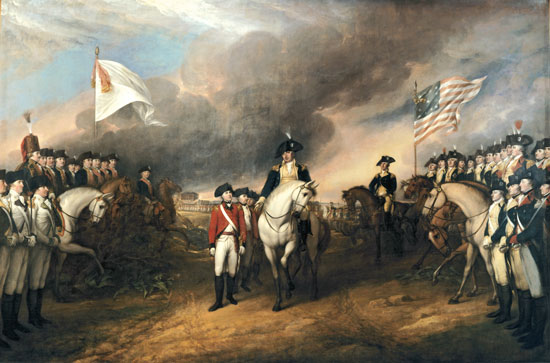 The painting Surrender of Lord Cornwallis by John Trumbull is on display in the Rotunda of the US Capitol.

On this date in 1781 British General Cornwallis surrendered at Yorktown effectively ending the American Revolutionary War thus creating the perfect nation that never, ever again had any troubles or disagreements.

What? That’s not in your history book?

Note that the phrase is “more perfect.” Not perfect.

We needed to be free from Britain. I mean for no other reason than the cuisine.

But the push for freedom came in large part because of the concept of taxation without representation.

Two-hunnert and thirty-some years later taxation with representation ain’t all that grand.

I must admit with the presidential primaries heating up, the temptation to get involved again is strong.

I mean, think of all the mockery available of those who have long complained that the country is run by old, white men who are flocking to support Bernie Sanders.

On a side note, if Bernie is your guy, please do us all a favor and answer a couple of questions. You don’t have to get back to me, but ask and answer them honestly.

1. How is Bernie going to pay for all of those free things he wants to give? and

2. Do you really trust the government to redistribute the money?

If you can answer those questions and still support the Bern, well then, bless your heart.

Sadly, for all of us, we’re going to get tired of these primaries and these debates. If we aren’t already.

Outside of the fact that I couldn’t live in a land-locked state, the primary season is just one more reason not to live in Iowa.

Nothing personal, Iowa. I’ve never even visited there.

If I ever do, it won’t be because I’m running.

In fact, thanks to current lower back issues, I’m barely walking. But that’s another story.

I need to visit Yorktown again. I’ve been spending a lot of time in Williamsburg where my current show opens on Friday. You may have heard about that.

The Historic Triangle is a fascinating place to visit and to think about what happened there and what it all meant.

Our freedom came at a great price.

No, this country wasn’t perfect from the beginning. It’s still far from perfect.