Being Civil about Disobedience

It seems that every time I stick my neck out, I get my foot into something else.

Oh, Patsy, I didn’t want to write about this.

I try, really I do, to stay out of political controversy. This has not always been the case.

I do not agree with Kim Davis. Some, perhaps many of my Christian and conservative friends (not mutually exclusive) will disagree with me.

I do admire Ms. Davis for not backing down from what she believes.

But, perhaps she chose the wrong hill to die on.

It’s true, however, that when she took the job, issuing marriage licenses to same sex couples was not an issue. The Supreme Court decision changed that. (And let’s be clear that they neither wrote a law nor re-wrote the Constitution, this is based on their interpretation.)

Her other, and I believe correct choice, would have been to resign. (Read what my friend Shaun said last week over at Bearing Drift).

Yes, I’m a believer. Yes, I know what Scripture says. Just remember that Scripture also says we’re not to judge those outside the church.

I’m not one to jump on the Christian persecution bandwagon. When I see images of Christians being beheaded or burned alive I really can’t call what is happening in Kentucky persecution.

At the same time, there’s a growing antagonism in this country against Christianity. There’s no denying that.

Jesus said there would be.

I think our only regret should be that we’ve caused some of it by not exactly remembering some of the other things Jesus said.

At the same time, the venom and the hate and insults toward Ms. Davis from those who disagree has been, at best, disgusting. She’s been mocked because of her appearance, because of her lifestyle before her faith conversion, because she’s from Kentucky, and more.

Yeah, I went there, too.

I’ve already said that I believe Ms. Davis made the wrong choice.

But, if you hate her or make fun of her because of her beliefs, or because of the stand she’s taking, then she’s not the problem.

Certainly not the only one. 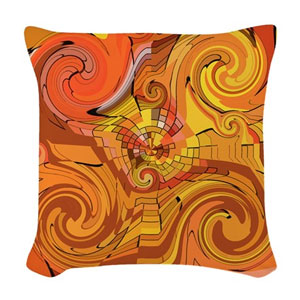 A Splash of Fall Woven Throw Pillow. This design and more available in The Write Side Shop (click the pic).