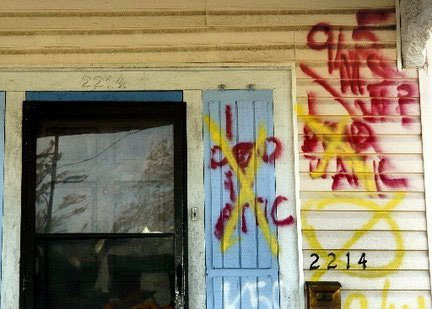 Everyone has been posting storm memories this week.

Ten years ago tomorrow, Katrina slammed into the Gulf Coast.

I’ve seen friends posting about Hurricane Andrew that struck southern Florida with a vengeance some 23 years ago this past week.

And in Virginia, there was Hurricane Camille, which hit the Gulf Coast in 1969 first but the storm continued north and , while no longer a hurricane, caused massive flooding in Virginia.  Nelson County was the worst hit, some 153 people died in Virginia alone.

It’s funny, I suppose, how those of us in the Southeastern United States remember periods of our lives based on the names of storms.

I remember I was on the Outer Banks of North Carolina when Alex came over in 2004.

I remember the horror of Isabel coming directly over our house in 2003.  The devastation in the neighborhood.  The weeks and months it took for many things to return to normal.  We were without power for 10 days in our neighborhood.  We finally arranged dog care and left town.  Seriously.

In 1996, Hurricane Fran left much of the Richmond area without power for days.  On one side of town folks were getting ready for the Fabergé Ball at the Virginia Museum of Fine Arts.  On the other side of town it was the NASCAR race.  We worked with the photographer for the ball.  We got showered and dressed at the YMCA.

I’ve had this conversation with a good friend a number of times.  He’s from California and is fascinated by the references to the named storms.

Regardless of how you remember, traumatic events like this leave lasting impressions.

I’ve never suffered severe hurricane damage.  Many of my friends have.

Sure, the aftermath of Isabel was miserable.  I remember coming to work day after day and a coworker asking if I had my power back.

Katrina and the Gulf Coast will always be significant for me.  I watched in horror along with the rest of the country as the storm pounded the city.  I saw and read the horror stories of people not being able to get out, of the nightmare of being inside the Superdome.  I watched as the levees failed and nearly 80% of the city was flooded.

I wanted to help.  All I could do that the time was to send some unused camping equipment by a friend.  I hope it got to the right place.

Almost immediately our church sent recovery teams, and later reconstruction teams.  I wanted to go early, but it wasn’t until 2008 that I was able to make my first trip.

The devastation was still horrifying.  As it was when I returned two years later in 2010. If I could, I’d go back again today because there’s still much to be done.

I don’t really view my life in terms of the storms I’ve endured.  Sure, I remember them.  Sure, I don’t want to live through them again.

But the thing about storms is that, at some point, the sun shines again. Sure it may shine down on a lot of mess and debris.

Southern Florida recovered after Andrew.  Although while I’m writing this we’re not sure what impact Erika will have.

Much of the Gulf Coast and a lot of New Orleans recovered from Katrina.

I wrote a novel about a post-Katrina relationship/life.  It’s in the editing stages. Literally.

We can’t stop life’s storms from coming. But if we pay attention, we can learn from the last one, and perhaps be better prepared for the next.