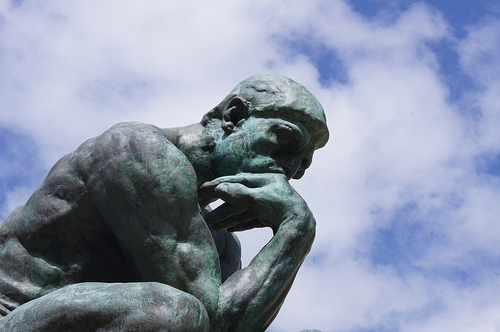 Monday. Not one of the above mentioned things to think about.

I realize that I’m mixing references and worlds here, all for the point of having yet another brilliant post.

But, I thought along these lines the other day when Seth Godin said: Make three lists.

He was talking about considering a new project. He said the lists should be:

– A list of everything that has to be true for this to be a good project.

– A list of all the skills you don’t have that would be important for this project to work.

Those are good lists. And good questions to ask.

In my current quest, I’m asking those questions a lot. I have a lot to think about it.

What has to be true for me to be a full time writer? And the answer can’t just be Publisher’s Clearing House.

Although I wouldn’t snark at that.

But the questions are real. How do you switch from the day job to something that requires you not only to be very good at your craft, but very good at marketing your craft.

I registered a new domain name the other day. The one I wanted, which, according to my Amazon affiliate account, I used to own, is available for a mere $2088.

So, I went with a variation.

I’m not in a hurry to launch. I want it to be done correctly. It will be my business home on the web and will link to the blog which is about many things, including writing.

What amazes me is that my inbox is now filling up with offers from web design companies.

That sort of falls under the second question of skills I don’t have.

Trust me, just like I told the guy at the door last night wanting to replace my windows, I’d like to. But not right now.

Instead I have some free web design software and a good amount of graphic design skills.  It will take longer, but I’ll do it myself.

It won’t be flashy. But it will function. And, when I hit the best seller list, I can have it redone.

So what’s your next project? And how to do you approach it?

Do you follow the list of questions above. Or are you a start the project first, ask questions later kind of person?

I’ve done both. And I’ll admit that sometimes I overthink a project and it never goes anywhere.

I’ll also admit that at times I have started projects and realized that I have neither the skills nor knowledge to complete the project and that’s when I have to rethink things, and sometimes call in help.

Trust me, I tried.

But that’s another story. I know I’m not a plumber.

Don’t even think about it.