Out! Out! Blank Spots!

Where it all began 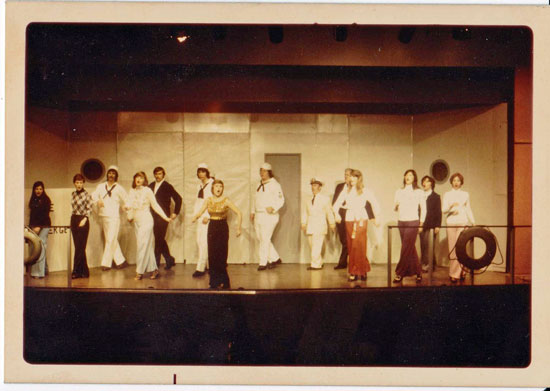 My sole inspiration is a telephone call from a director.

It was the winter of my junior year in high school. Sitting in choir one day, the director told us that the local community theater needed chorus members for Anything Goes. I convinced one of my best friends to go along with me.

Truth is, up until that point, I probably had no idea who Cole Porter was. I may or may not have heard some of his music. But I was a teenager in the 70s. It’s not likely I was collecting his 45s.

We were assigned to be sailors in the chorus. That meant we got to dance with the teenage girls in the cast. They were very gracious. But the truth also is that they likely would have turned each of us down had we asked them out.

I don’t know how many weeks of rehearsal we had. But finally opening night came. I wore stage makeup for the first time. The real, pancake stuff.

The music started, we came on stage and sang. And, at some point in the evening I got to look at Hope Harcourt and say “You’ll never get to heaven if you’re not an angel.”

It was a set up for the song.

Yes it’s a corny line. This was musical theatre initially staged in the 1930s.

I didn’t get the chance to go back to work with that theater, and I wasn’t back on the acting stage until college. After college life happened and it was years, lots of years, before I was back on stage again.

But the acting bug never went away. You know much of the rest of the story.

I have fond memories of my time with Anything Goes. And I hold in my heart a special place for the cast mates whom I know have passed: Nancy, Corky, Mike.

Those were special times.

They were, in fact, de-lovely.