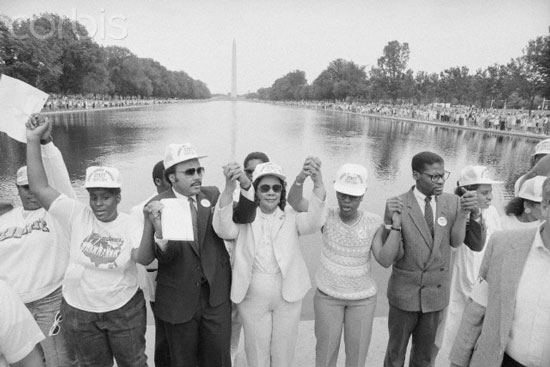 Washington DC. Mrs. Coretta Scott King, widow of Martin Luther King, Jr., joins hands with others at the reflecting pool near the Lincoln Memorial in the hands across America celebration 5/25. the Washington Monument is in the background. © Bettmann/CORBIS

No seriously, I really am.

It was Sunday, May 25, 1986 and we held Hands Across America. I joined a co-worker on the National Mall. We were there not far from Coretta Scott King, pictured above. Looking at the picture I’m somewhere on the edge of the water, about halfway down the right side.

I’m the one wearing the Hands Across America t-shirt.

At least they said we did.

Not far from where I am, President Ronald Reagan and First Lady Nancy Reagan linked hands across the porch of the White House.

In the pre-Internet days, this how we did activism. We couldn’t share videos where we dumped ice on our heads, or put on funny red noses and take our pictures, or talk about what color bra we’re wearing or where we’re moving in three months Or something like that.

We did this without the power of the Internet. And it was pretty cool.

Hands Across America raised $34 million for local charities to fight hunger, homelessness, and poverty. Most of this was raised by the $10 fee we all paid to be a part of the chain.

We didn’t end poverty. But helped and, perhaps more importantly, we raised awareness. And we crossed political boundaries to do so.

Standing outside on a warm spring day wasn’t really much of a sacrifice.

Today is Memorial Day, and we remember those who paid the ultimate sacrifice for our freedom. Freedom that allows us to stand and hold hands on a Sunday afternoon.

We have our flag flying from the front of our house today. It is a flag that once flew over the U.S. Capitol Building in honor of my father-in-law’s birthday. He preserved and displayed the flag and the certificate that came with it. Because we had arranged for the flag to be flown in DC, it came back to us when he passed.

Today it flies in honor of those who gave their lives for this country.

But we also fly it in honor of those who were prepared to do the very same, but thankfully, for us, they came back home. Here in our household, they include:

My father-in-law, Leonard, who was with the occupying forces in Japan during WWII.

My father, Marvin, who served in Germany after WWII and was later called back to Korea.

My stepfather, Cecil, who served in the Pacific Theater during WWII.

My uncle, James, who gave his life to military career and served around the world.

My aunt, Lulu, a Navy nurse who was one of the first six women to be allowed to ride in a submarine.

My friend, Matt, a Marine who served bravely in the first Gulf War.

My cousin, Josh, who served bravely in the second Gulf War.

None of these died in battle, but they were prepared to do so. And on this day, we honor them as well.

A hero is no braver than an ordinary man, but he is brave five minutes longer.

I am thankful to live in the home of the free, because of the brave.