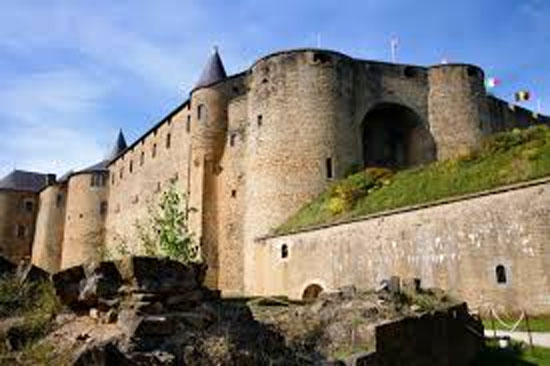 Chateau Fort de Sedan, France. Apparently, I have ancestors who lived in this neighborhood.

On this day in 1563 the Edict of Amboise was signed by Catherine de’ Medici, acting as regent for her son Charles IX of France. Officially, this treaty ended the first phase of the French Wars of Religion and guaranteed the Huguenots religious privileges and freedoms, thus restoring the peace.

I’m not enough of an historian to know much more about French history or the history of the Huguenots.

What I know about my connection to the Huguenots begins in the early 1700s when Abraham Soblet sailed from England to Virginia. When they arrived at the mouth of the James River, then Lieutenant Governor Francis Nicholson sent them west along the James to an Indian village abandoned by the Monacan tribe.

Abraham Soblet was my ancestor. The name became Americanized to Sublett. If you’re familiar with the Richmond area you know of both Huguenot Road, and Sublett Tavern, a little further west along the James.

That’s my family. Or part of it. My great grandmother, Matilda Sublett was descended from Abraham Soblet. I wrote a little about her last year.

Somewhere in the files I have the whole history. I’m not digging that out for the purposes of this post. But it traces the family line from Europe down to my great grandmother and her many siblings and cousins.

I’ve told you before that I don’t believe in coincidence. I live about a block off of Courthouse Road, which is an extension of Huguenot Road.

It’s bizarre to think my family was in this area more than 300 years ago.

It’s also bizarre to find out through a few clicks of the Interwebz that I share ancestors with both Senator John McCain and Laura Bush. They are also descendants of Abraham Soblet.

Perhaps if I’d known about the John McCain connection I might have been kinder with some of my words back when I was still playing politics.

I think I’m more disappointed that cousin Laura never invited me to the White House.

But, further research inidicates that I’m officially eligible to be considered a Son of the American Revolution.

Of course the worst part about all of this is that now I want to go do genealogy research and put all of the pieces together.

You know without my saying it that I don’t have time to do that right now.

I suppose it’s only been 300 years. Waiting a little longer won’t hurt.