We Have Lost Our Minds: Holiday Edition 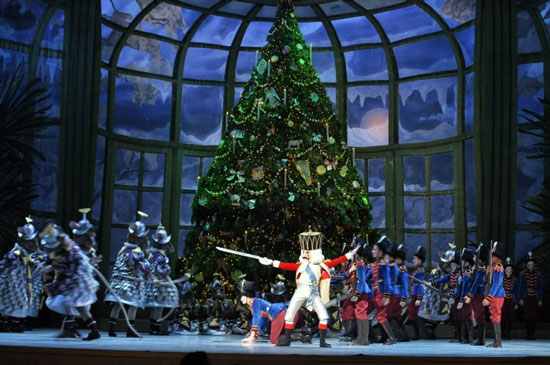 The Pennsylvania Ballet performs George Balanchine’s The Nutcracker.
Credit: Photo by B. Krist for Visit Philadelphia™

The stupid.  It burns.

As a recovering political geek, I have to work hard at not getting into political firestorms.  Generally, I’ll just hide your Facebook posts and move on.  And I’m not even going to mention a certain Commander in Chief’s recent speech that doesn’t follow the law but does seek to do something because Congress apparently can’t.

But Monday, I read three stories that made me think these people are either off their meds or suffering from a serious lack of protein.

Sometimes the insanity rises to such an acute level of dumbassery that it would be tragic were it not mocked at every opportunity.

In Boston, educators, and I use that term loosely, went Nutcrackers over a Christmas tree.

While the decision has since been reversed, The Butler Elementary School PTA in Belmont, Massachusetts had initially cancelled a field trip for children to see The Nutcracker because parents had complained of “questionable content.” [WHDH]

I’ll wait right here while you run the show through your head looking said content.

According to some parents, the ballet contains religious content and the PTA was being discriminatory if they supported the field trip.

If I was making this up you wouldn’t believe it.

You know what’s really offensive?  These people are educating children.

I am not mocking or snarking at the belief of anyone who does not celebrate Christmas.  I respect your right to be wrong about the Greatest Story Ever Told.

But you are not guaranteed the right to not be offended.  And, to be offended over a Christmas tree in one of the most famous and classic ballets in like…ever?

Next time just tell the school that your child will not be going to the performance, and stop being such a Scrooge.

Sorry if you find yet another classic holiday reference offensive.

Well, actually no, I’m not.

But, let’s not stop there.

I only wish I was a talented enough writer to write fantasy like this.

The incident began when one of the activists grabbed one of the dead and iced-over fowls, looked at the camera, and said “In memory of a life lost,” before taking it over to the meat department and shouting “It’s not food, it’s violence.” Other members clad in black clothing, and carrying flowers and signs arrived with a miniature cardboard coffin where the chicken was placed. The lead activist then proceeded with a eulogy and lamented about the abuse and trauma chickens go through simply for being born as a species that humans rely on for food.[Business2Community]

People choose not to eat meat for lots of reason.  Health.  Preference.  Moral issues.  I have no problem with that.

But when you have a eulogy in the frozen foods section, I’m thinking you really need to find another source of protein.

Or maybe, like the Mayor of Seattle, you need more sunshine.

To be fair to the Mayor, he said he was just having a bit of fun to draw attention to “hunger in the community.

Now that the tofurky has been left to happily live his retirement years at the Rainier Valley Food Bank, my only criticism of the story is that I lost out on a really good snark.

But don’t worry that the tofurky is off the menu.  Maybe there will be lamb.