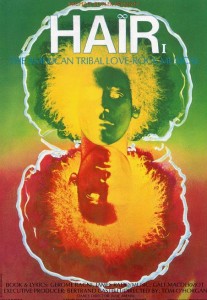 On this day in 1968, the musical Hair opened at Shaftesbury Theatre in London. It played 1,998 performances.

It’s earlier on a Saturday morning than I care to be up. But it’s a day full of rehearsals, chores and performances.

It’s also a morning where I woke up realizing that the story of my dream was a combination of the shows I’ve been in over the last three years. I don’t normally recall dreams. This one I do because the story lines of those shows merged, but seemed to make complete sense to me. If only I could download it into a text file, I could kick some serious Nanowrimo behind.

My favorite thing one of the characters said? “I don’t have to change until after the second murder.”

It made complete sense. At the time.

It’s the season of football and at least one of my teams is having a great season. Not so much for the Redskins, or the Hokies. Although I do expect the Hokies to improve.

But my high school team, the Giles High School Spartans, remains undefeated. That didn’t happen when I was there. No, I didn’t play. For a while I was in marching band and my last three years I spent every home game behind the popcorn maker in the concesssion stand. #truestory

Here. Read these things and get on with your Saturday.

In the Virginia senate race between incumbent Mark Warner, and challenger Ed Gillespie, Gillespie has closed the gap in the polls, with Quinnipiac showing that Warner leads 48-39. Significant to note is that this is tightened from something like a 19 pt. lead, and Warner hasn’t polled above 50% in most of the race. Still, Gillespie has a long way to go. Could a Republican wave pull him across the finish line? We’ll know in a little more than a month. [H/T Bearing Drift]

Bill and Hillary are grandparents.

Chelsea Clinton tweeted early this morning that she and her husband, Marc, welcome their new daughter Charlotte Clinton Mezvinsky. [USAToday]

Get out there and enjoy some of them. You’re paying for them.

If you’re still looking for something to do:

Of course, you need to come out to see Poe’s Haunted Homecoming. We run through October 7.

Then there’s the State Fair of Virginia, going on now.

As well as Halloween Haunt, happening now at Kings Dominion.

It’s a beautiful day. Log off and get outside.