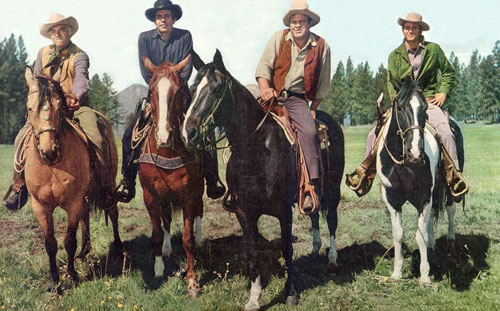 Bonanza, the first regularly scheduled TV program presented in color, premiered on NBC on this day in 1959.

Adam Cartwright: Let’s go back to the Ponderosa, Pa. This isn’t any of our affair.
Ben Cartwright: We can’t ignore the rest of the world. We’re the only stabilizing influence in the country.

We’ve been to war in the Middle East. We didn’t like it. We got tired of it. And we’re frustrated with the fact that things aren’t settled over there yet. Truth is, they never will be.

Yesterday’s commemoration of the attacks of 9/11 remind us that we’re not safe from attacks. Don’t be naive to think that everything is happening “over there.”

I’m not being an alarmist. We can’t live in fear. We have to carry on.

But we likewise cannot ignore those who do live in fear. In Israel, in Syria, in Iraq, in Sudan.

We can’t ignore what is going on.

We don’t want to get involved. We don’t have the stomach for it. Yet, how can we turn away?

Dietrich Bonhoeffer who was executed just two weeks prior to the U.S. Army liberating Flossenburg concentration camp said, “Silence in the face of evil is evil itself. God will not hold us guiltless. Not to speak is to speak. Not to act is to act.”

Timothy George is the dean of the Beeson Divinity School of Samford University. He wrote this week:

Twenty-five years of the off-and-on Bush-Obama land wars in Asia have not made the streets of Baghdad safe, nor brought peace between Israel and her neighbors, nor eradicated the virulence of religious violence. ISIS itself was spawned in part through America’s ambivalent connivance in the recent (and ongoing) sectarian wars in Syria where some 200,000 people have been killed and more than 6.5 million others internally displaced or exiled. Libya is yet another country where the quick-fix use of force without a sustainable strategy has not alleviated but rather increased human suffering.

And yet—and yet—there are times in human history when persons of faith cannot play neutral or simply stand by on the sidelines. There are times when they are compelled by conscience to call evil by name and speak out against it with conviction. And they must do this not merely out of a concern for their own personal or national self-protection but precisely as persons of faith—in the name of decency and love and of all that is human and humane. Today is such a time.

But, what should that response be?

It’s easy to sit back in our living rooms or at our computer desks and determine what should be done. But there’s nothing easy about the real decisions that have to be made.

I suspect that President Obama has discovered that the decisions are not as easy as he thought when he was Senator or Candidate Obama. Truth is, I suspect that’s been true for every president.

There are critics of the Bush administration who say George Bush was too quick to go to war. Many of those critics are in the current administration.

But Jean Card, who worked in the Bush administration wrote this week in U.S. News and World Report:

Last weekend, White House senior adviser Dan Pfeiffer defended the president’s lack of a strategy by, surprise, criticizing the Bush administration. It was a combination of two favorite Obama White House tactics: Blame Bush and put up a straw man to knock down, then act like you just made a good point. Which you didn’t. Aside from that, Pfeiffer’s example was simply wrong…Decisions about the war on terror were anything but quick in the Bush administration. If Pfeiffer talked to anyone involved in those tough decisions, he’d know better. Come to think of it, this would be an outstanding time for Pfeiffer and other White House advisers to have a talk with top Bush advisers. The decisions around war are incredibly hard. No one wants to make them, but there can be comfort and learning from talking to those who have had to do it before.

I don’t know the answers. And I’m glad I’m not in the position of having to make the decisions.

But as I wrote a couple of weeks ago, we can’t ignore the questions. And really, this post has more questions than answers.

Pa Cartwright was right, “We can’t ignore the rest of the world.”