Road Trip Back in Time 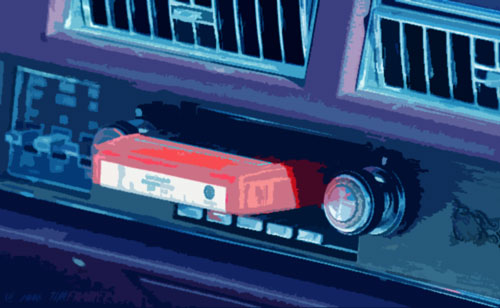 When I was young
I’d listen to the radio
Waitin’ for my favorite songs When they played I’d sing along
It made me smile.

Consider this a variation on the theme of the melancholy posts you’re going to get after every trip I make home.

Like you, I went back to work on Tuesday morning after a long weekend, knowing that summer was officially over and that school was starting again. Perhaps also like you, I got to the office and put on some tunes. Depending on what I’m doing, I like to have music to play in the background.

Sometimes it’s gospel, sometimes Broadway. Lately it’s been “my” generation’s music of the 60s and 70s. Ladies and gentlemen, they just do not make music like that anymore.

Somewhere in the mix a song (or maybe multiple songs) will come back that evoke certain memories, certain feelings, certain friends.

Remember that time when…

Invariably a song will also bring back memories of every dumbass thing I said or did. Like that time I ended up in the cafeteria in my underwear. Oh wait…maybe that was a dream. If it wasn’t I’m sure some 9-year-old hacker will find it in the iCloud and try to blackmail me out of my fortune. Good luck, kid.

I have great memories of high school, but I don’t want to go back. True, I do miss the youth, and the not-gray hair. And I promise I’d take much better care of my knees. But I have neither the desire nor energy to re-live the past forty years.

Still, it seems like life was much simpler then. Much easier. The world was less of a nasty place. Of course we had Vietnam and Watergate and gas prices…and Jimmy Carter. And let’s not forget disco.

Maybe it was the ignorance of my youth that I didn’t see how bad things really were. Or maybe it’s the early onset dementia that’s making me forget.

The President seems to think that the world’s always been messy and that it’s social media that makes us believe things are worse. He said recently at a Democratic party fundraiser, “The truth of the matter is that the world has always been messy. In part, we’re just noticing now because of social media and our capacity to see in intimate detail the hardships that people are going through.” [CNET]

Certainly social media keeps us more informed on a regular basis. We don’t have to rely (thankfully) on the nightly news of the three big networks. If we did, we’d probably hear little of the apparent beheading of another American journalist, or the crucifixion of Christians by radical Islamists. And, here in Virginia, we probably wouldn’t know every nasty name Maureen McDonnell has ever been called.

I have to disagree with the President. I think things are much worse than they were twenty years ago, even ten years ago. I’m no alarmist, but I think it’s naïve to ignore the facts. Although maybe it does look different from the back nine.

Look, I don’t care what color suit he wears. I just question his ability, or desire, to lead us in times of crisis.

But wait, this post is about music. And memories.

Those were such happy times
And not so long ago
How I wondered where they’d gone
But they’re back again
Just like a long lost friend
All the songs I loved so well.

Every Sha-la-la-la
Every Wo-o-wo-o
Still shines
Every shing-a-ling-a-ling
That they’re startin’ to sing’s
So fine.