Music to lose a Congressman by 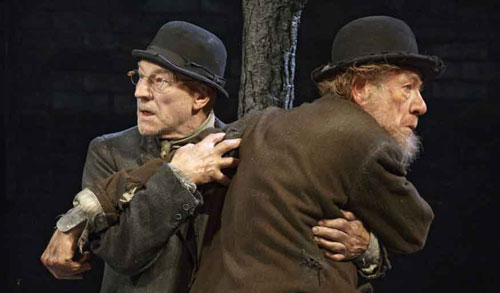 McKellan and Stewart waited for Godot, but he never came.

There’s this scene in Chariots of Fire before the first race between Eric Liddell and Harold Abrahams where they’re getting ready in the locker room. It’s silent, no one speaks, the sound of the amazing score by Vangelis is playing in the background.

The scene portrays the tension in the room. Liddell and Abrahams are likely to be Britain’s best hope at the upcoming Olypmics in Paris.

Liddell wins the race and Abrahams is distraught and shares the sadness with the Borg Queen. Then Bilbo Baggins comes and tells him he has a magic ring to help him win.

Don’t panic. Your geek quotient has to be pretty high to follow that last sequence. But I had dinner with our good friends Maragaret and Rita last night and they thought it was brilliant.

The point is the silence before the competition.

I had an audition yesterday. It was a film audition for a museum piece. I’ll tell you more if I’m cast.

I don’t do much film work. I prefer to work on the stage. But, I fit the character description, and there’s a paycheck.

There were about a half dozen folks there when I was there. But we shared little conversation. Most of us were reviewing the lines we’d been given, and sizing up the other actors to see who was going for the same part. No one was being rude, just quiet. It wasn’t the time for frivolous conversation. Plus we were right outside the room where the auditions were being taped.

One by one we were called, did our stuff, and left.

Not all auditions are like that. Some theaters bring everyone into the room and have folks read from the script in various configurations. This allows the director to see how people look together on stage and how they react together. Some venues have everyone in the room at the same time. Some bring you in a few at a time.

Because they’re different types of productions, I see the necessity of both types of auditions.

In the quiet waiting rooms, I’ll use the time to go over lines, or lyrics for a musical audition. I can never quite review them enough.

And, like so many auditions, I’ll generally have a director tell me to “slow down and try again.”

My favorite line from Chariots of Fire comes when Eric tells his sister, “I believe God made me for a purpose, but he also made me fast. And when I run I feel His pleasure.”

Okay, I don’t run. But apparently in auditions I speak too fast.

I’m not so sure why. I think we can all be pretty darn sure it’s not my metabolism. But it is a very rare occasion when a director will tell me to speak more quickly.

It’s pretty much a lifelong thing. My one and only sermon (okay it was a Bible study) was finished in less than five minutes.

But both times of waiting gave mini-opportunities to clear out the cobwebs in the brain. Not as much on the first one because of the pressure of the audition. But with my eyes dilated at the doctor’s office, there was little I could do but wait.

Life moves too quickly these days. I don’t think that’s just because I’m getting older. With instant communication, and instant news we don’t want to wait. We want the information or the product or the service right now.

There are mornings that the Keurig takes too long with the coffee.

Last night, because my pupils were still roughly the size of hula hoops, my wife drove to the restaurant, I jumped out (okay, it wasn’t really a jump) and ran in (okay, okay…) walked in to see how long the wait was. Apparently the large groups of people waiting outside were a decoy. We went right in. No waiting.

Waiting may not be easy, but it’s not always a bad thing. Sometimes when we wait for something, we appreciate it more when it gets here.

Let’s see if we can wrap this up with one more Chariots of Fire reference.

In Paris, Abrahams is set to run his race. His coach, Sam Mussabini (who really isn’t Bilbo Baggins and won’t be for another twenty years), can’t attend the race because he’s a professional coach, of course forbidden by the Olympics (at least at the time). He waits in his hotel room near the stadium. When he knows the race is over he listens and hears “God Save the King” (it was a king at the time), and knows that Abrahams had won the medal.

For Sam, it was worth the wait. It did cost him a good hat (for heaven’s sake, just watch the movie already).

Okay, three things, I’m waiting for it to be time for us to go to the beach.

At least two of those three things will be worth the wait.

And yes, by the way, I once tried to wait for Godot, but the casting call never came.