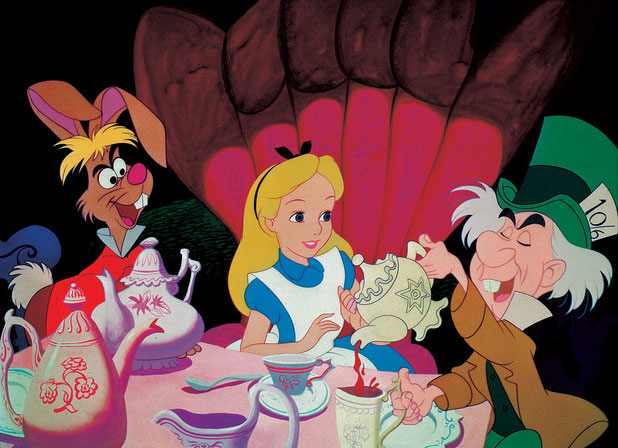 Walt Disney’s “Alice in Wonderland” premiered in London on July 26, 1951

Let’s not mince words, it was a crappy week. In the news, and on several levels in this house. I’ll spare you the details, but let’s just say I’m weary.

Still, that’s no excuse for not doing the usual roundup. And when I read some of these stories, my week really wasn’t that bad.

Once sentenced to death for being a Christian, Meriam Ibrahim and her family finally were able to leave Sudan and make it to Italy this week. In Rome, Meriam met with Pope Francis.

In Northern Iraq, Christians have been told to convert to Islam, pay a tax or flee. Homes have been marked with the Arabic letter “N,” standing for the Arabic word “Nasrani,” or “Nazarene.” This is one of the oldest Christian communities and the site where God called Jonah to preach to Ninevah. Earlier this week, Muslim extremists destroyed what was believed to be the

But wars are all based on religion…not so fast

Talking to Billboard Magazine about his new song Playing Dumb, which mourns victims of the Catholic church sex abuse scandals, singer Tom Petty said “Religion seems to me to be at the base of all wars. I’ve nothing against defending yourself, but I don’t think, spiritually speaking, that there’s any conception of God that should be telling you to be violent. It seems to me that no one’s got Christ more wrong than the Christians.”

But The Blaze reports that John A. Tures, a political science professor at LaGrange College in Georgia said that for the past four centuries the majority of the world conflicts, including those occuring after 9/11 have nothing to do with religion.

Tures says, ““Religion is still less likely to be a source of conflict than natural resources like oil, or questions of governance, or even good old fashioned territorial disputes…Radicals of their faith get a lot of media attention, and so folks who aren’t familiar with religion assume all religions and religious people think this way, which they don’t.”

Thursday morning a tornado ripped through the Cherrystone Family Camping and RV Resort in Northampton County on Virginia’s Eastern Shore. A couple, both 38 years old were killed when a tree fell on their tent. Their 13-year-old son was hospitalized with life threatening injuries. More than 30 others were injured.

Virginia Governor Terry McAuliffe toured the site on Friday. He called for the community to pray for the victims and said, “At 8:30 in the morning, luckily I think most people were up. But had they been asleep and more people in their tents and their campers, I think what occurred here yesterday would’ve been much worse. It is a tragedy, but as I say, the good Lord was watching out.” [ABC News]

Did we bail out GM so that they could recall 16 million cars?

Government at its best. Or at least government money. Breitbart notes, “Something is rotten in the state of General Motors, the company that Barack Obama bailed out. GM announced this past week that they would have to recall nearly 500,000 more cars for a variety of reasons.” But that’s only the latest round in some 16 million recalls. Were they really worth saving?

A life spent making mistakes is not only more honorable, but more useful than a life spent doing nothing.