The cat’s out of, or actually on, the bag 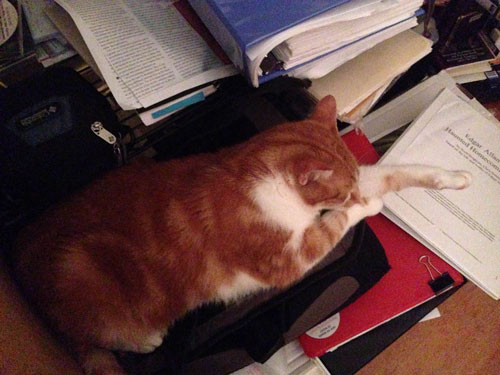 The cat has the right idea.

It’s late Tuesday night, technically very early Wednesday morning, as I write this. I have too much too do, but I want to keep with my daily posting schedule.

I could be paying bills, or editing, or writing chapters in the novel, or any number of things.

“But there were planes to catch and bills to pay…”

Except this time, the cat’s not in the cradle, he’s sleeping on the messenger bag. I noted that on Facebook and pointed out that I need something from the bag, but that this was the quietest he’d been all evening. Perhaps all day, since the dog had consumed all of the cat food again and it was after 8:00 before I could get any back to the house.

I think I could learn from the cat.

His reality is that his agenda is never booked. He eats, he sleeps, he hunts, he sleeps, he poops, he sleeps. And if he has to meow incessantly to accomplish those things, he does that. The biggest challenge he faces is when Daddy sits in the comfy chair. he has to get to the lap before the dog does.

The cat has no Daytimer, no Google calendar, no social media to manage (that we’re aware of).

I, on the other hand, would like to get to that Daytimer on which he’s currently sleeping. I had notes in the accompanying Moleskin notebook about what to write for a post.

The thing about the cat is, he knows when its time to take a nap. Generally, that’s most of the day and night. Still, he doesn’t stress, once he’s full, once he’s hunted a bit, then it’s naptime.

It’s a balance. And he does it quite well.

Throughout the day, and into the evening, I’m constantly making notes, writing them in the Moleskin, adding them into the reminders on my iPhone, copying text and links into Evernote.

I’m sort of on information overload. And I’m never done.

I have half a dozen projects right now I could spend several more hours on this evening.

Being up this late is a guarantee that I won’t make the gym in the morning. That’s not a good thing.

Also, studies are now showing that we’re more productive when we get a good night’s sleep and we even do better at losing weight.

What is it that keeps us all so busy these days? When I was growing up, bedtime was most definitely before 10. We didn’t have somewhere to go every evening. Didn’t spend all day at work or school and then come home and sit down at the computer (or desk) back then. And we seemed to get along fine.

Maybe there’s no point to this post. Maybe I’m just rambling because I needed to post something.

Maybe it’s the reality that it’s been eleven months since our beach vacation. The Daytimer’s not going. The laptop is not going. I need the time to clear out the cobwebs.

Maybe there’s another post I should have written but the cat’s sleeping on it.