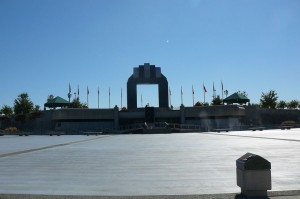 Seventy years ago today, the Allied Forces stormed the beaches of Normandy in what would be the beginning of the end of World War II in the European theater. 160,000 Allied troops landed on the French coastline. General Dwight D. Eisenhower said that this would be a crusadd in which “we will accept nothing less than full victory.” More than 9,000 Allied Soldiers were killed or wounded. But the march to defeat Hitler had begun.

Of those 9,000 lost or wounded, no community suffered more than the small Virginia town of Bedford, Virginia. Bedford lost more young men per-capita than any other community in the United States. Bedford, the home of the Bedford Boys, as they came to be called, is now the home of the National D-Day Memorial. A worthy place for a visit. At today’s ceremony, a sculpture honoring the Bedford Boys will be dedicated.

Today, some 10,000 visitors are expected to gather in Bedford for the 70th commemoration. Among them are several hundred of the remaining survivors.

It was a different time in our country. A time when, as the nation went to war, the whole country went to war. It was not something we watched on the evening news, as we did Vietnam. Or something we debated on the Internet as we did (and do) Iraq and Afghanistan. We were all at war. Sure there were detractors who thought we didn’t belong there.

But, in World War II, as the sons and fathers went off to fight in Europe and the Pacific, mothers and families went to pray, they planted victory gardens. Women went into the work force in record numbers. The country was at war. We were all at war.

So, I’m not sure that I will ever completely understand the sacrifice of those who landed on Normandy, willingly or otherwise. I once talked with a veteran who had been there that day. He came home and became a doctor. He’s passed on now, but I remember him saying “I was a scared 18-year-old, just trying not to get shot.” He made it home. Far too many didn’t.

But our country understood that there was an evil to be stopped. So, sacrifices were made. Lives were lost. But, freedom was gained.

Ten years ago yesterday, we lost the man I consider the greatest U.S. President of my lifetime. He spoke eloquently at Normandy on the 40th Anniversary of the landing.