Oh sure, today I find out that June is Men’s Health Month 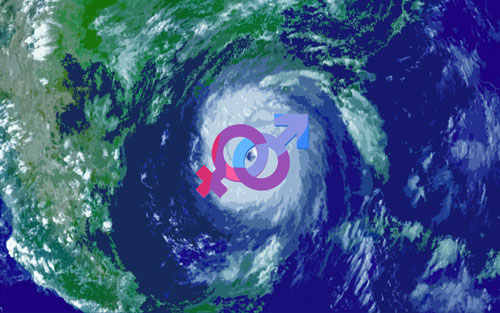 Apparently we’re more afraid of storms with Hispanic male names. Or something like that.

“[Our] model suggests that changing a severe hurricane’s name from Charley … to Eloise … could nearly triple its death toll,” the study says. [Washington Post]

This is not from The Onion. Granted, it’s the Washington Post, which isn’t all that different than The Onion, but that’s not the point.

Are we really that shallow? No, make that stupid. In today’s world where updates are up to the minute via television, Internet and smart phone. And in a world where we’ve all seen the damage done by Katrina (who was left out of the study) and Sandy, is there really any validity to this?

Maybe Mother Nature is just using the storm-namers to thin out the herd.

What’s that saying about “having the sense to come in out of the rain?”

And, on another note, did we pay for this study with government funding?

Look, I’m not making fun of storm related deaths. Storms are serious things. I’ve weathered one on the Outer Banks (and bought the t-shirt). I’ve lived 10-days, post-Isabel, without power. And I’ve been to New Orleans twice to do post-Katrina reconstruction work.

But to imply that people measure the severity and impact of the storm based on the name? Personally, my gauge is how likely it is to make Shepherd Smith cry on national television.

Maybe we just need a hashtag.