Requiem for a Mall

Can it be the Altria Mosque?

But, that’s not what she said 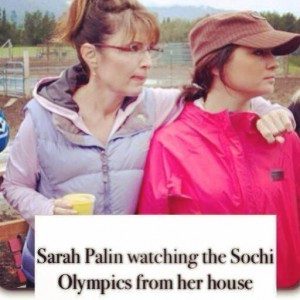 Last week this image was floating around Facebook. I admit, it’s hysterical. Many things are funny because they carry an element of truth.

This one does not.

But if you ask just about anybody on the street, at the gym, at your church, they’ll tell you that yes, Sarah Palin actually said “I can see Russia from my house.”

Look, I’m not a Sarah Palin fan. I used to be. Her entrance into the 2008 campaign actually energized the election. I do think she was blindsided by the media on many occasions. She’s brighter than many folks would believe. But she wasn’t ready for prime time. Personally, she lost me when she resigned as governor. That’s another story.

What actually happened was that during a 2008 campaign when asked about foreign experience, Palin talked about the fact that Alaska was indeed close to Russia, she told Charles Gibson, “They’re our next-door neighbors, and you can actually see Russia from land here in Alaska, from an island in Alaska.”

Enter Saturday Night Live where Tina Fey did an amazing job portraying Palin. No question there. She was hysterical. In an intro where Fey was playing Palin and Amy Poehler was portraying Hillary Clinton. This was the exchange:

POEHLER AS CLINTON: (OVERLAPPING) “Anything. I believe that diplomacy should be the cornerstone of any foreign policy.”

FEY AS PALIN: “And I can see Russia from my house.”

It was brilliant television. Later on, to show her good natured side, Palin actually appeared on Saturday Night Live.

Also later on, news reports noted, that yes, on a clear day, you actually can see parts of Russia from an island in Alaska.

But that’s not the story we remember. Whether or not you like Sarah Palin is not the point. She’s not the only one to be spoofed or misquoted.

Truth is, we’re gullible. Truth is, we often share something before we check it out. I’ve told you before why this happens on Facebook.

We believe what we want to believe. But it’s our responsibility to check things out before spreading the story. We certainly can no longer rely on the media to do that. There are few, if any, objective news outlets remaining.

Speaking of Russia, consider this from Stephen F. Cohen at The Nation speaking about the news coming out of Russia during the Olympics:

There are notable exceptions, but a general pattern has developed. Even in the venerable New York Times and Washington Post, news reports, editorials and commentaries no longer adhere rigorously to traditional journalistic standards, often failing to provide essential facts and context; to make a clear distinction between reporting and analysis; to require at least two different political or “expert” views on major developments; or to publish opposing opinions on their op-ed pages. As a result, American media on Russia today are less objective, less balanced, more conformist and scarcely less ideological than when they covered Soviet Russia during the Cold War.

He’s not even talking about NBC and their horrific coverage, or non-coverage, of the Olympics.

Fortunately, if we want the real story, we have social media. We can look for it.

Just remember that the truth is not likely contained in an image thousands have shared on Facebook.