365 Things I Believe: Every Battle 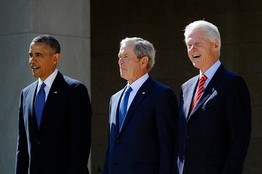 In a way that only she can, Peggy Noonan writes of the contrast between President’s at this week’s dedication of the George W. Bush Presidential Library.

President Obama was more formal than the other speakers and less confident than usual, as if he knew he was surrounded by people who have something he doesn’t. “No matter how much you think you’re ready to assume the office of the president, it’s impossible to understand the nature of the job until it’s yours.” This is a way of seeming to laud others when you’re lauding yourself. He veered into current policy disputes, using Mr. Bush’s failed comprehensive immigration reform to buttress his own effort. That was manipulative, graceless and typical.