Just in Case He Sees His Shadow 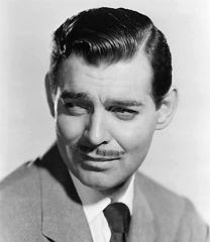 He was forever to be known as Rhett Butler. Nominated for the Academy Award for Best Actor in Gone with the Wind, he was also nominated for Mutiny on the Bounty, but won his Oscar for It Happened One Night.

In his early 20s, Gable toured with stock companies and worked his way from his native midwest to Portland, Oregon. There he met Laura Hope Crews who encouraged his theater career. Later Crews would play Aunt Pittypat in Gone with the Wind. Gable was also mentored by Joesephine Dillon who paid for his dental work and taught him posture and body control.

Gable initially did not want to play the role of Rhett Butler, but later in his life he said that whenever his career would start to fade, a re-release of Gone With the Wind would revive his popularity. His final line “Frankly my dear, I don’t give damn.” was controversial given the Motion Picture Association’s forbidding of the use of the words “hell” or “damn.” In November, 1939, just before the release of the film in December the Association passed an amendment that allowed the use when the word “shall be essential and required for portrayal, in proper historical context, of any scene or dialogue based upon historical fact or folklore … or a quotation from a literary work, provided that no such use shall be permitted which is intrinsically objectionable or offends good taste.” Leonard J. Leff and Jerold L. Simmons, The Dame in the Kimono: Hollywood, Censorship, and the Production Code, pgs. 107-8. [via Wikipedia]

Gable’s third wife was actress Carole Lombard who died in an airplane crash in 1942 on a flight tha tincluded 15 service men on their way to training. She was declared to be the first war-related American female casualty of World War II. After her death, Gable joined the U.S. Army Air Corps. He spent most of the war in Britain and flew five combat missions. He was promoted to Major in 1944 but after D-Day requested a discharge. His discharge papers were signed by Captain Ronald Reagan.

Gable returned to acting after the war and would make films with several of Hollywood’s leading female stars. Clark Gable’s final film was The Misfits in which he appeared with Marilyn Monroe. It was also her final screen appearance.